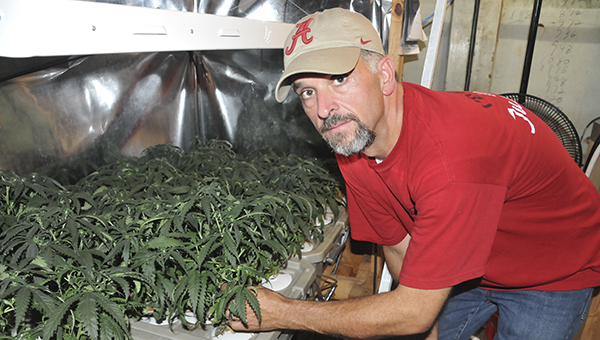 DTF Agent Greg Jackson said the investigation led to a search warrant and the arrest of 41-year-old Larry Ladon Ellisor.

“We’ve been working on this thing for about a week and a half,” Jackson said. “We received some information that there was a grow here at the house. We decided that we got enough to get a search warrant.”

Jackson said when the search warrant was executed, Ellisor was at his residence down the road.

The grow operation was housed in an outdoor shed.

The entrance to the underground growing room was disguised by a pick-up truck sized tool box.

Jackson said after searching the shed, agents made contact with Ellisor at his residence.

“Here at this scene, we found a pretty substantial marijuana grow operation,” he said. “We don’t have a weight or amount yet.”

Jackson said there were 40 growing plants and 40 plants that had been harvested.

“There are a lot of processed marijuana, or drying marijuana, and we also found marijuana, methamphetamine smoking device and remnants of marijuana at his house down the road, which is on Hicks Road,” he said.

Jackson said he received information from a narcotics agent from another county, which started the investigation.

“One of his (confidential informants) had told him that there was a grow here, and I started doing some investigative work,” he said.

Ellisor has been charged with one count each of drug trafficking and possession of a controlled substance; and two counts of possession of drug paraphernalia.

Ellisor is being held in the Covington County Jail under a $630,000 bond.