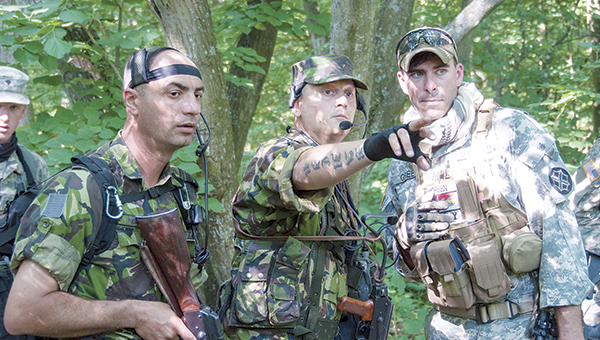 Despite the language barrier, members of the A-Troop 131st Calvary Alabama National Guard Unit out of Florala just completed a successful training deployment in Romania.

Twenty-one local soldiers were among the 101 troops who participated in Operation Red Dragon, which was a joint-training exercise between the U.S. Army and the Romanian army from June 8-26.

Staff Sgt. Mason Chapman said when Guard members arrived, they were split up into different groups.

The training, which took place on land, included missions the Florala calvary performs with route reconnaissance, area and screen operations, Chapman said. Route reconnaissance is an intelligence assessment of the operational environment. A screen operation is a form of security operation that provides early warning to a protected force. Area operations are a form of security operation that’s conducted to provide friendly forces, installations, routes and actions within a specific area.

“Basically, in a given area we have eyes and our objective is to land and report back what we see,” he said. “We execute fragmentation orders as they come.”

Additionally, Chapman said the local unit got the chance to shoot Romanian firearms, from small arms to sniper rifles.

“It was really good training,” he said. “We definitely took a lot from them.”

Chapman said despite the language barrier, the Romanian army picked up on what they were displaying well.

“There was a bit of a language barrier, but a lot of their senior officers and the majority of their officers spoke English, so that did make things a little easier,” he said. “They do have a little different way of doing things. It was more of a Soviet doctrine because they were under the Iron Curtain for so long.”

The Iron Curtain was the conflict and physical boundary dividing Europe into two separate areas from the end of World War II until the end of the Cold War in 1991.

While it may have been hot here in South Alabama, the weather was perfect in Romania, Chapman said.

“The weather was great,” he said. “We had highs in the low 80s, and at night it would be around 60. The humidity was very low.”

Additionally, Chapman said the unit was welcomed with open arms in Romania.

“The people there and the soldiers are all very nice and good hosts,” he said.