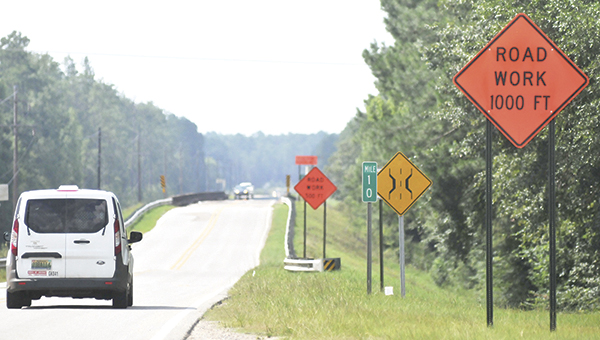 A commuter drives north on Highway 55 near the Yellow River Bridge on Wednesday afternoon. Road construction is set to begin today, starting at SR-15 in Andalusia. | Andrew Garner/Star-News

No detours needed for construction

Motorists won’t have to detour around the newest road construction on Highway 55 from SR-15 in Andalusia to Yellow River Bridge as workers begin to widen, resurface and stripe the 14-mile stretch of road today.

“We’re going to mill it off, widen it next, and then come back and put your asphalt on top of the whole thing,” Watts said.

Watts said this project will be a 75-day job, but hopes to have it done in five weeks, around the third week of August.

Watts said construction will start in Andalusia and will move south.

After the milling work is done, approximately 23,000 tons of asphalt will be laid on the road.

The road requires 5,400 tons for the widening portion of the project. Each shoulder will be widened two feet. For the surface, which covers the road itself, 17,800 tons of asphalt will be laid.

A temporary stripe for through traffic will be painted while the work is being completed.

Once the asphalt cures, which Watts said takes 14 days, the construction crew will paint permanent stripes.

High summer temperatures make for a hot working environment, but Watts said the crew is used to the heat and takes plenty of precaution every day.

“We keep plenty of fluids, and drink a lot during the day,” he said. “Right now, it has been really hot the last two weeks out here.

“We’re normally working 12 hours a day, but we’ve been knocking it back to eight to 10 hours,” he said.

Watts urged motorists to reduce their speed once while driving through the construction zone.

The Alabama Department of Transportation has posted signs, striping and traffic control devices to guide motorists through the area.