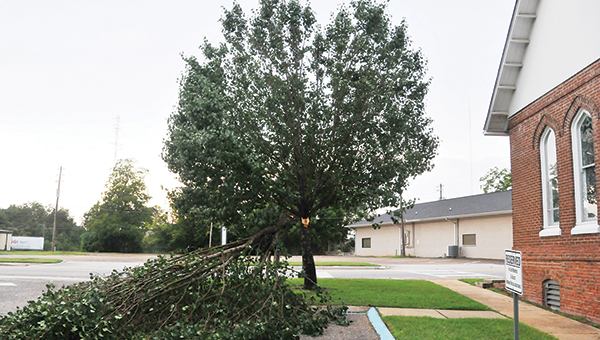 A tree limb broke in front of First Presbyterian Church in Andalusia during a strong set of storms that swept through the area. | Andrew Garner/Star-News

Covington County EMA Director Susan Harris said trees and powerlines were down across the county, but no structure damage was reported.

“I don’t think we had a tornado, but there is a lot of wind damage,” she said.

Mark Parker with Covington Electric said there was 200 customers in the Red Level and Opp areas of their service territory without power.

“We’ve got some scattered outages because of the story, but we are working to get those back on,” he said.

Stacey Parker with Opp Utilities said that the storm came through the city, but the only damage that was reported was a tree down on Foster Street.

“We have no reported outages,” he said. “We have some issues with the red lights at the intersection of College and Hart,” he said. “We’ve been blessed.”

Jeff Puckett with the Andalusia Utilities said 150 customers were without power after the storm.

Trees fell in Green Acres and Bellwood subdivisions, he said.

Brad Kimbro of Wiregrass Electric Cooperative, which services a small portion of the county east of Florala said some 500 customers were without power.

Florala Fire Chief Jarred Martin said no one had reported any damage or outages to his department.

Is your child up-to-date on his shots?