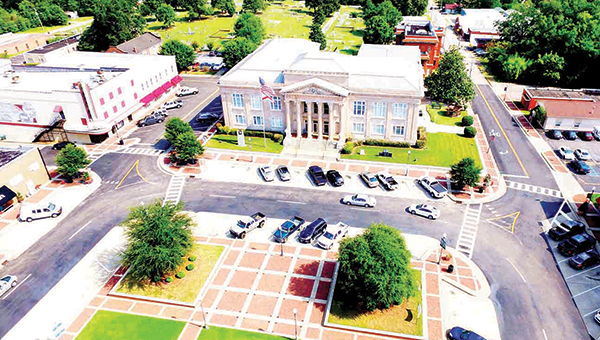 Shown is the Covington County courthouse on the square in Andalusia. This picture was taken by a quad drone, which carries a camera high in the air to take scenic shots of buildings and landmarks. | Courtesy of Gary & Henry Kinsey

Those who have wondered why a drone has been flying in the local skies can rest easy as a local photographer is trying to record history in his own way.

Henry Kinsey has been using quad drones with a mounted camera to take pictures of businesses, schools and other historical buildings.

“We’re doing it for historical reasons and also if people want pictures made of anything, we can do it,” Kinsey said.

A quad drone is a flying machine with four propellers that allows users to fly up high in the air for aerial photos.

Kinsey said he’s sent the drone up 100-150 feet, where it stays put so the camera can do its work.

“We can just shoot anything we want,” he said.

The camera being used is a high-resolution camera with 14 megapixels, Kinsey said.