The State of Alabama resumed executions Thursday night when Christopher Eugene Brooks was executed by lethal injection at Holman Correctional Facility in Atmore.

It was the state’s first execution since 2013.

”Tonight, by order of the court, at 6:06 p.m., the State of Alabama carried out an execution of Christopher Eugene Brooks by lethal injection,” Alabama Department of Corrections Commissioner Jeff Dunn said.

The drugs were 500 milligrams of midazolam hydrochloride, a sedative; followed by 600 milligrams of rocuronium bromide, which stops breathing; and 240 milliequivalents of potassium chloride to stop the heart.

Brooks was convicted of the 1992 capital murder of Jo Deanne Campbell of Jefferson County, Ala. He was sentenced to death on Nov. 10, 1993.

Dunn said before Brooks was executed, he made a statement. 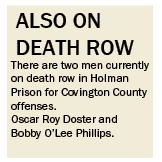 “I want to thank all of my loved ones. I love all of you. I will be forever grateful for your love. I hope this brings closure to everyone involved. These last two years have been amazing. I hope to see you soon.”

After Dunn gave initial comments on the execution, he read written statements from the victim’s family members, which include Campbell’s mother and sisters.

“The execution of Christopher Eugene Brooks has not given me closure, but what I do have closure with is the appeal after appeal keeping me and my family stressed for over 20 years,” Campbell’s mother, Mona said in her statement. “His execution did not and will not bring back my precious young daughter whom I love with all of my heart. I know that she’s in heaven with her father and someday God will allow me to join them.

“I hope that Brooks, who has done this horrible and inhumane act, has made peace with God,” she said.

Lockette said Brooks spoke briefly with the chaplain, who held his hand.

“A few minutes after that, he closed his eyes, his lips parted and his breathing grew more shallow,” Lockette said. “By 6:30 I believe, the curtain was pulled and we were escorted out of the witness room.”

Lockette said there were distress during the execution process.

“(Brooks) seemed to be completely still,” he said, adding that he didn’t see him move except his breathing.

Kent Faulk with AL.com, who also witnessed the execution, said one of Brooks’ friends was crying.

Then, at 6:17 p.m., a corrections captain performed a consciousness check, which entailed the captain calling Brooks’ name twice and lifting up his eye lid, another witness said.

This is the first execution that’s been carried out in the state since July 2013.