A reason to be thankful: son’s health being restored 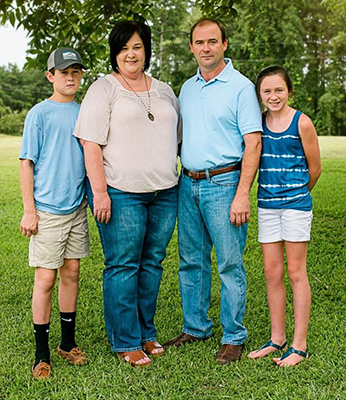 Jackson, Kristy, Terry, and Chloe Conway. The family actually moved to Houston for Jackson’s treatments. He recently had a successful surgery.

The Conway family has a lot to be thankful for this year.

Jackson Conway, a 14-year-old from Evergreen, noticed a painful bump in the side of his mouth and was taken to the ER for treatment.

After several appointments and tests, the bump was diagnosed as malignant.

Conway was referred to the Children’s Hospital of Alabama and he received his final diagnosis there: Metastastic Ewing’s Sarcoma.

“From there, we really decided we needed a second opinion, and we decided MD Anderson in Houston was a good fit,” Kristy Conway, Jackson’s mother said.

By July of 2017, the Conway family decided that moving to Houston would be better for Jackson’s situation.

The two couldn’t attend school in Houston, so Sparta Academy sent assignments weekly for the children.

Jackson was enrolled and accepted into a clinical trial, which started with six rounds of chemo.

“They were so very helpful in everything they did,” Kristy said, “I remember asking the oncologist if she thought that MD Anderson was the best place for Jackson, and she said, ‘We have the best surgeons here.’”

On Nov. 10, surgeons removed the mass from Jackson’s jaw, using his fibula to replace any bone loss. As a skin graft, the doctors used skin from his thigh to patch the area up on his leg where he had part of his fibula removed.

“It was a 10-hour surgery,” Kristy said. “But I never had my doubts, the doctors were very confident in what they were doing,”

After surgery, Jackson had a feeding tube, a trach tube, and a boot for his leg that was used for bone and skin graft.

“Jack-son was so positive, he has such huge faith,” Kristy said. “And he helped build our faith, we just left it all to God.”

Since then, Jackson’s feeding tube has been removed, and next Tues., Nov. 28, he will have his trach tube removed and his boot taken off.

“I’m thankful that we prayed, surrendered, and gave it all to God. We had a wonderful outcome for his surgery, and I am so thankful for all the support that came from Sparta Academy, our Facebook group, Cancer Freeze, and everyone who prayed for Jackson,” Kristy said.

The Conway family plans to move back to Evergreen after all of Jackson’s treatments are completed. Jackson is a Cancer Freeze recipient for 2018.