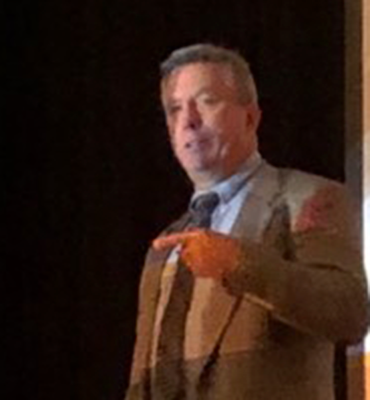 A 30-year veteran of Kentucky State Police and and retired KSP post commander is teaching local high schoolers the potential dangers of marijuana.

He was sponsored by the Covington County Children’s Policy Council, and will also visit Andalusia, Opp, Straughn, and Pleasant Home High Schools this week

Shemelya is the coordinator of the National Marijuana Initiative. He’s responsible for monitoring the 28 High Intensity Drug Trafficking areas nationwide.

“That tells us that Alabama has a significant drug problem, but still lower than most in the United States,” Shemelya said. “But what I’m here for today is inform you all on the misconceptions of marijuana.”

Shemelya told the students that marijuana was once less potent.

“THC levels in the marijuana from the 60s and 70s didn’t exceed 30 percent concentration,” Shemelya said. “Today’s marijuana definitely exceeds that, and the market is targeted more than ever toward teens.”

He warns against using marijuana in adolescent ages.

“The average age of first contact with marijuana is 11 years old,” Shemelya said.

One of the key points of Shemelya’s message was that there is a lot of misinformation insinuating marijuana is not harmful, and that legalizing it would be helpful.

“We honestly have no idea what today’s marijuana has in it,” Shemelya said. “There are no scientific facts presented that suggests marijuana as a cure,”

Shemelya showed a slideshow of teens who died after marijuana usage.

While the marijuana didn’t kill the teens, each one had a link to trying marijuana for the first time and entering a psychotic state where they ended their lives.

It goes deeper than that for Shemelya, however.

His cousin’s son, Will, overdosed in Kentucky with cookies that he purchased from Colorado that contained THC. Will also took a dab.

Dabs are concentrated doses of cannabis that are made by extracting THC and other cannabinoids using a solvent like butane, turning it into a sticky oil.

Dabs can be referred as wax, shatter, butter, or hash oil.

Dabs are heated up, and inhaled with dab ring.

“Will and his friends saved up some of their money, and had one of his friend’s family members purchase $2,000 worth of dab,” Shemelya said. “It was his first ever time of smoking weed, he was a student athlete, an honor student, and he had full ride scholarships lined up for when he graduated high school.”

On the way to a local McDonald’s, Will started to have trouble breathing. Within four minutes, the local paramedics made it to the scene and took Will to a local hospital where he was hooked up to breathing tubes.

“I couldn’t understand what happened, but when I went to his truck, I found the $2,000 worth of dab, the pipe they used, as well as his phone had several searches on how to take smoke dabs,” Shemelya said.

Will went on to spend 9 more days in the hospital.

“I’m telling this to you all right now, because you’re the target for the marijuana market. It’s not all good. There are some strains of marijuana that can be used medicinally. Those are prescribed in doses. They’re not free reign, it’s not at all like the marijuana in Colorado. There have been 18,000 cases of cannabinoid poisoning since legalization. Marijuana is a pathway drug, and it is addictive. I’ve seen it first hand.” Shemelya said.