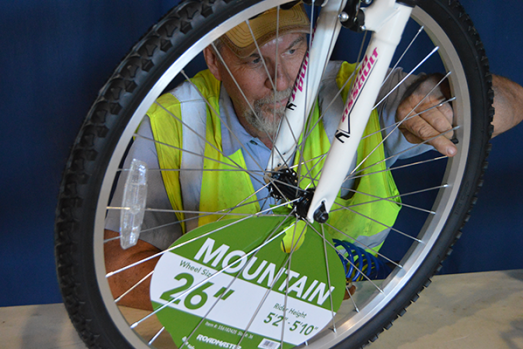 Robert Elliott focuses intently on the wheel of one of the bikes. 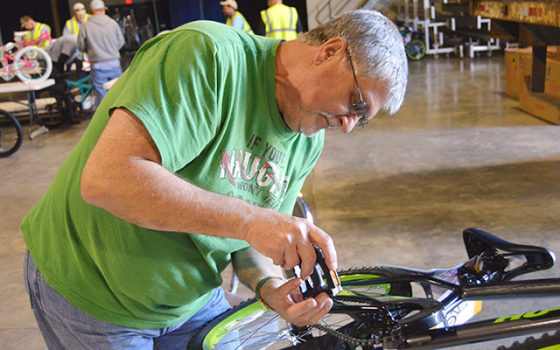 A group of local volunteers could likely get jobs in Santa’s workshop, they’ve become so adept at assembling bicycles.

The men work together each year to get the bicycles ready for the annual Community Christmas party. This year, they’ll put together 147 bikes over the course of two days.

The volunteers began assembly Monday and will continue today.

“I’ve been volunteering for several years now,” Billy Joe Stallworth, one of the volunteers from the Andalusia Lions Club, said.

“A lot of us from the Lions Club come in and help. We’ve taken it on as a sort of community project. But there are a lot of people who go into this,” Stallworth said.

“There are people who work with the city, people from the gas company. It’s a community effort.”

It doesn’t take too long to put the bikes together, volunteers said.

To build the bike, volunteers have to unpack them from the boxes, screw in the front tires, the pedals and the handlebar.

“Once we get started, it happens pretty quick. We spend most of the afternoon up here putting them together. After the first bike or two, you get the hang of it,” Stallworth said.

“What really matters is we’re helping a whole lot of kids. They really love these bikes, and we really love helping out.”

In addition to the bikes, the Pilot Club of Andalusia fits each recipient of a bicycle with a helmet, as apart of a mission to promote brain safety.

“Our main reason for handing out helmets is to ensure kids will practice brain safety,” Ann Hammonds, a member of the Pilot Club said.

“Brain trauma is a very serious thing, and we hope the children’s parents will have them practice safety.”

The helmets are funded through the Pilot Club’s pancake and sausage breakfast.

“Our main goal in Pilot Club is to encourage brain safety and health.” Hammonds said.

This year, the Community Christmas organization will provide presents for more than 300 children.

Community Christmas will be on Dec. 15, 2017, in the Kiwanis Building.