The Sutherland, Texas, shooting that claimed at least 26 lives, has done more than open the eyes of churchgoers in the community, it’s put them in gear to plan for future attacks. 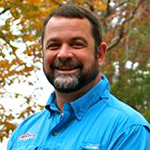 While others are planing security measures in response to the shootings, Steve Lewandowski, the director of Blue Lake Methodist Camp and a member of First United Methodist Church of Andalusia, has already developed a manual on church security.

“It started when I first came to Alabama a year ago and I went to purchase a concealed carry permit,” Lewandowski said. “I gave them my money, they did a background check, and I got my permit. That process is too easy.”

Lewandowski’s background in the Texas Parks and Wildlife made him question why the system to acquire a permit to carry a firearm was just two small steps.

A lot of the bad guys don’t get weeded out from the background check alone, Lewandowski said.

That’s when he decided he was going to write a manual on church safety.

“The training manual started as more of a conversation starter. I wanted to open the eyes of my church members on possible situations, and it really went from there,” Lewandowski said.

“I really just wanted people to realize that evil never takes a holiday, not even a Sunday,” he said.

“It’s something I felt like I needed to do to get people discussing this issue.”

A lot of people often have knee-jerk reactions when events like this happen, Lewandowski said.

As far as security options for the First United Methodist Church, Lewandowski says they are weighing their options.

“I carry in church. There’s no rules that saw you can’t,” Lewandowski said.

“We’re taking it slow on what we can do right now, but I’d like in the future to have an established security team of people who carry firearms in church, they would be identified and known as security team.”

There are three different kinds of people in this world, Lewandowski said.

“There’s the sheep, who’re weak and act on nothing. The wolves that prey on the weak; and then the sheepdogs blend in with the crowd until it’s time to act. That’s what a church security team would be.”