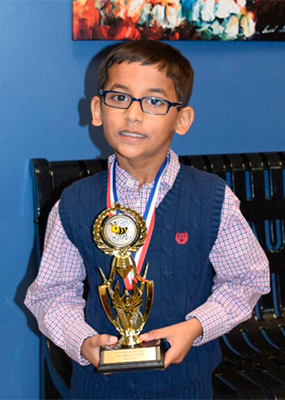 The Patel name has become synonymous with spelling in Straughn and Covington County, and Dhilan Patel is no exception.

Patel, a second grader at SES, won the school spelling bee this year, and aims to surpass the accomplishments of his brother, Taj, in spelling.

“I practiced with my mother, father and brother a lot,” Patel said.

“With the computer too.”

For Patel, his brother pushes him to be better.

Out of 48 participants and seven rounds, Patel became the 2017-2018 SES Spelling Bee winner.

“My favorite word to spell is big,” Patel said.

“I think the hardest word to spell is ‘entrepreneur.’ ”

Because of his win, Patel will go on to compete in the Covington County Spelling Bee in February.

If his brother Taj wins the spelling bee for Straughn Middle School, the two would be set to compete.