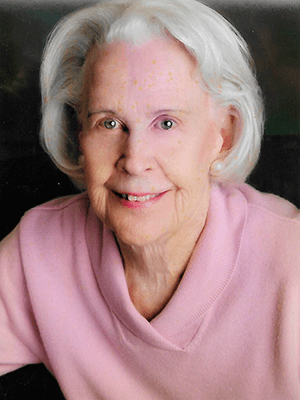 Martha Dixon was remembered Monday as a Southern lady whose charm, quick wit and sharp business mind stayed with her until the end.

Rhett Johnson first met the Dixons when he interviewed to become the director of the Solon Dixon Forestry Education Center.

“She frightened us a little bit,” he said of us first impression of her. “She asked pointed questions when we were interviewed.”

In retrospect, he understands that she wanted to make sure he was someone who would not attempt to take advantage of her husband. Through the years, they became close friends.

Her mind remained sharp, and she took a lively interest in current events. Two weeks ago, she was hospitalized, and had been unresponsive most of the morning.

“Every now and then, she would open her eyes,” Johnson said. “She was having a hard time talking, but she called me over. I bent down, expecting something profound, and she said, ‘Did you hear Matt Laurer got fired?’

“I said, ‘Yes, ma’am. But how did you?’ She was interested in everything.”

She also had a keen sense of humor. In her husband’s later years, the two couples often travelled together. Johnson did the driving.

In response, she gave him striped trousers – similar to those worn by chauffeurs – for Christmas.

“I served on the foundation board with her, and was her chauffeur for many years,” she said. “I loved her, and she was very dear to me. I will miss her greatly.”

Phillip Jones, also a longtime foundation board member, said Mrs. Dixon was the same person when she spoke with the president of Auburn University as she was with anyone she met on the street.

“She was just down to earth,” he said. “She was quick-witted and sharp. She was very conscientious about where the (foundation) money went.”

Trippy McGuire remembered her as a “magnificent humanitarian.”

“She loved life, people and Auburn,” he said. “Like her husband, she had a deep love for Covington County and the county is so much better off today because of them and the contributions of the Solon and Martha Dixon Foundation.”

Both McGuire and board member Louisa Baker said they will remember the ever-present twinkle in Mrs. Dixon’s eyes.

“A few weeks ago, we had a new photo made with all of the Foundation board members and Martha,” Baker said. “Amazingly, when we arrived, she was sitting up in her wheelchair, in a pretty, pink sweater, with her silver hair styled in a simple fashion and that twinkle in her clear, blue eyes.”

“For a woman of such great accomplishment and success, Mrs. Martha always maintained such a wonderful sense of humility. She was a historian with a great memory and sense of humor. We all enjoyed her stories.”

Baker said even as her declining health prevented her from leaving her home, Mrs. Dixon never complained.

“She always seemed happy to see you,” she said.

Born Martha Belvin on Set. 1, 1915, to Fannie Brewer Belvin and Robert L. Belvin, Mrs. Dixon was educated in Andalusia City Schools. During the Great Depression, at age 15 and six credits away from high school graduation, she left school to work at Alatex.

In a 2015 interview, just before her 100th birthday, she said of her growing up years, “We were too poor to have fun.” (See full interview, here.)

She remained at the Alatex for 10 years before accepting a job in Columbus, Ga., at a cotton mill.

Following the call to aid her country during World War II, she enlisted in the Armed Forces (WAC) and served at the Pentagon from 1943 to 1946. She was attached to the Second AAR Base Unit, Bolling Field, D.C. in the weather service.

After the war she returned to Andalusuia, completed Andalusia Business School, and was employed at Alatex, a local manufacturing company, for 32 years until her retirement in 1969. She worked part-time until 1976, when she married Solon Dixon. The two shared a strong work ethic, a strong sense of community, and a love of the land. Solon Dixon was concerned that future generations of foresters be fully prepared to care for the forestlands that he so loved.

On Dec. 15, 1978, the Dixons deeded 80 acres to Auburn University, and presented a check for $500,000 to begin construction of the Solon Dixon Forestry Education Center. Later gifts have brought the center to 5,400 acres and seen the construction of classrooms, administrative office buildings, cafeteria, auditorium, dormitories for both students and faculty, and directors’ residences. The Dixon home has become a museum and invites visitors to learn the history of the forward-thinking family and couple.

In addition to forestry-related projects, the foundation’s bylaws allow for contributions to other charitable organizations. Through these contributions, the lives of thousands of area and state residents have been touched.

A memorial service will be held at a yet-to-be-announced date. For complete obituary info, click here.