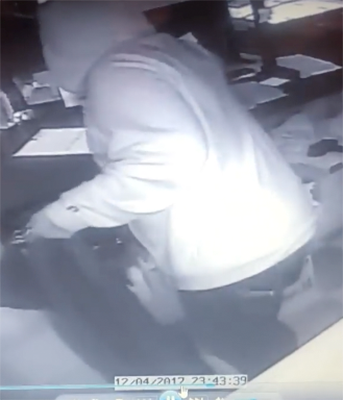 A local business owner whose store was burgalized hopes that the use of social media will help identify those responsible.

On Dec. 4, two people wearing masks, gloves and baggy clothing robbed the Our Country Store in Carolina. They were armed with trash bags and had an intent to steal money.

Luckily, Robin Fleming, the owner, had a security system that alerted the authorities as soon as the door opened.

“They broke in about 4:04 a.m., and were gone within 5-10 minutes. They left before law enforcement could even get there,” Fleming said.

“They came in specifically looking for money, but got out with beer, Swisher Sweets (cigarillos) and lighters.”

That’s not all, though.

The burglars managed to bust the front door up and ransack the back office area.

“I’m not sure what they were looking for in the filing cabinet, I guess money,” Fleming said.

The burglars didn’t realize there was a security camera, she said.

“They backed up right where we could see their license plate next to the building. I don’t think they knew we had a camera,” Fleming said.

The two burglars are caught on tape walking behind the counter with heavy duty trashbags, grabbing things.

On the outside video footage there’s a clear view of the dark colored car and the burglars escape.

“Even though we didn’t lose a lot of items, we still want to catch them. There has been a lot of robberies in Covington County within the last two weeks. So many people have come forward to tell us that they’ve also been robbed. We just want these people caught so that they don’t rob others.”

“People are tired of getting stolen from,” Fleming said.

Fleming posted the video footage to her Facebook page and is hoping to have someone identify the robbers.

The case is still under investigation by the Covington County Sheriff’s Department.