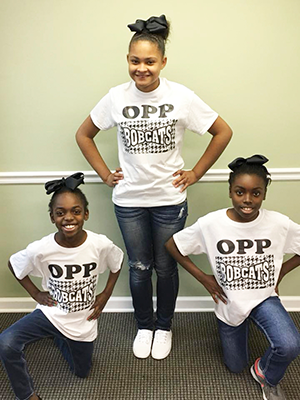 If the saying “quality over quantity” is true, then the Opp Housing Authority Cheerleading team has nothing to worry about in competitions.

This is the first year the Opp Housing Authority has been able to offer a cheer team. The group will perform in a competition in LaGrange, Ga., from Jan. 12-15.

The competition is specifically for housing authorities throughout the southeastern region.

In addition to the competition, the team members go on educational tours within the LaGrange vicinity.

“This year we didn’t have as many people sign up for the basketball team,” Beverly Barber, the executive director of the Opp Housing Authority, said.

The teams really bring the community together, Barber said.

“Being on a team really brings together a sense of motivation and sportsmanship,” Barber said. “We had four girls sign up for the cheer team.”

The only thing is they have struggled to get participation within the two teams; basketball and cheer.

“What people don’t realize is that it’s completely free. We pay for the uniforms of both teams, for their travel, food and any other costs for when we go to these competitions. It’s such a good thing to be a part of,” Nakeia Adair, the cheer coach and Section 8 coordinator for the Opp Housing Authority, said.

The teams within the housing authority offer incentives and rules.

“You have to be within the housing authority to be on the teams and you have to maintain a ‘C’ average in school,” Barber said.

“All the members of our cheer team are A and B students.”

“Some children have never even been outside of Opp. They’ve never eaten at a fancy restaurant, never dressed up to go out. We are giving them that experience,” she said.

The cheer team formed near the end of November.

“We tried to get on started in the summer, but we had no sign-ups. I think that has a lot to do with the fact parents think you have to pay money to participate,” Adair said.

Every week for the past six weeks, the team has practiced on Tuesdays and Thursdays.

“We started off working on the basic foundations of cheerleading and they really improved,” Adair said.

It’s not about winning for this team, Adair said.

“It’s about having good sportsmanship, motivation for next year, and learning commitment,” Adair said.

For the competition, the cheerleading squad will perform a cheer with a jump that leads directly into a dance and will finish with a stunt.

“The girls are very excited and really enjoy this opportunity. I hope that next year we can have more participation,” Adair said.

“If I could set a goal for this program it would be to have more participation. This is an entirely free program and it gives children a wonderful opportunity to learn how to be a part of a team and respect each other.”