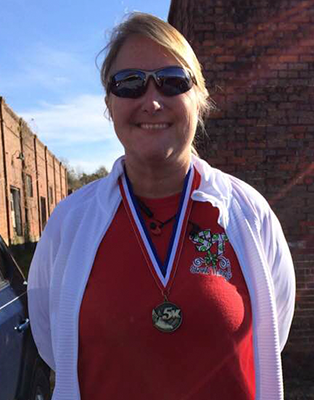 Henley said she started running because knew she’d had enough with being unhealthy.

“I was just really scared I was going to die. I was taking seven different kinds of medicines, I just felt awful. I was ‘fat’,” she said.

Henley’s main reason for change was because she wanted to be able to watch her grandchildren grow up.

That all changed when Henley joined Run For God, a local running group based on challenging people to follow a step by step process.

Run For God is a 12-week program that covers running methods, proper running gear, stretching, injury prevention, nutrition, weight loss, and race etiquette. Participants job for one minute the first week, and 12 weeks later, complete a 5K, or 3.1 mile race. There are also sessions of fellowship and motivational classes.

The group offers two classes a year, one in the fall and one in the spring.

Henley graduated near the end of November.

“I remember first starting and thinking I was literally going to die,” she said.

“But it’s a step-by-step process, they don’t push you harder than you need to be pushed. You start out by running for just five minutes.”

“If you set your mind to do something and hold yourself accountable, you can do anything. It’s not impossible,” she said.

After running for 12 weeks, Henley’s blood pressure medicine was no longer needed.

“I just started feeling better, I didn’t have to take any of my medicine anymore. I woke up feeling refreshed and ready to start my day. I just overall feel better,” she said.

“I’m still a work in progress,” she said. “It’s a daily grind. Some days you’re just not going to want to work out, and that’s when you really need to get up and make an effort.”

For those who feel overwhelmed at the thought of getting in shape, she offered some advice.

“Start somewhere small. Walk for five minutes, run for 30 seconds. Take it slow and keep in mind of what your body needs.”

“Running is one foot after the other. Every time I run, I ask God to pick it up so that I can put it down,” Henley said.

To learn more about Run For God, click here, or visit the group’s Facebook page. The next class begins March 3.