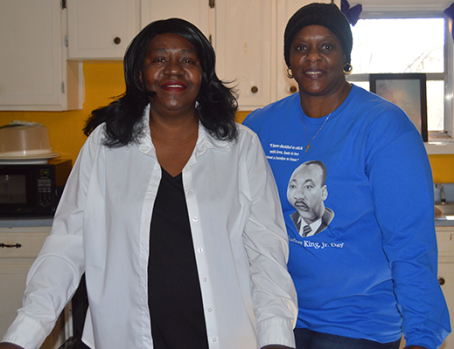 Artheria Womack and Allison Hines pose in the kitchen following the service. 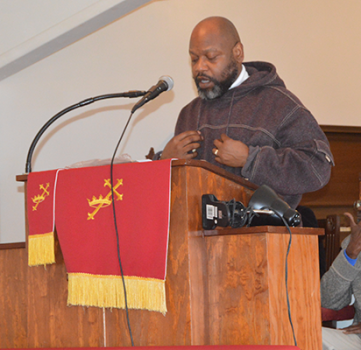 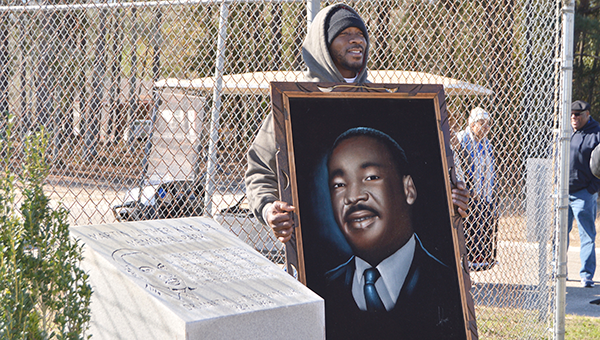 Jason Stoudemire holds a portrait of MLK near the monument on Hardin Street. 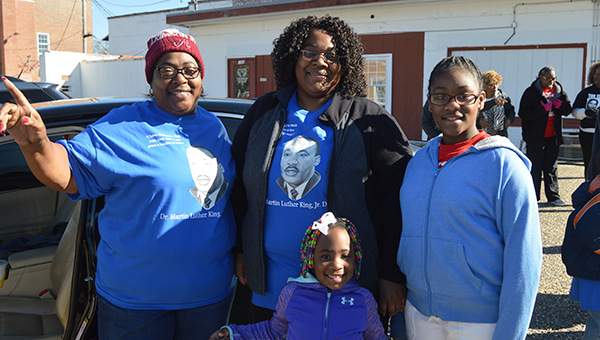 Pastor Joe Smith said he remembers a time when, as an African American, he had to go to the back door of a restaurant to be served.

A time when, because of the color of his skin, he had to use a separate restroom and water fountain in the courthouse.

And a time when people yelled racial slurs at him and his mother as they walked from town.

“Back in the ’50-60s, when I grew up, there was a restaurant in Elba. It was called the ‘Big R’ and the only way you got served as a black person was to walk around back,” Smith said. “If you walked in the courthouse, you had a separate bathroom. Water fountains were the same way.”

But Dr. Martin Luther King Jr. led a civil rights movement and shared his dream or equality. Smith lived to see what King promised could be, he said in a MLK Day program at St. Stephen’s A.M.E. Church in Opp Monday.

A lot of things happened back then, Smith said.

“I remember me and my mother walking home from town, a car passed by us and came to a stop next to us. They yelled out of the vehicle, ‘Hey (racial slur omitted), get off the street!’”

“We’ve come a long way, but we have a long way to go,” Smith said. “We still thank God for the way things are.”

Smith said Monday’s gathering, and the march that preceded it, were planned “to give honor to Dr. King and to unite as one.”

Opp District Four councilman Lavaughn Hines said, “I’m glad to be here today and have pride for what Martin did for us. We can’t let that go in vain.”

“We have to work together. District Four will not grow unless we come together. We need a strong support system.”

It starts with children, the Rev. Lawrence said.

“We have to teach our children principles on how to live a good life,” he said.

After the sermon, Hines honored a member of the community with a plaque, Mittie B. Edwards.

“Every year our march gets smaller and smaller. I want to see people from all communities come together. We pray for the whole community and the whole world,” Hines said.

Before the program, more than 47 people marched from the Opp Police Department to the Dr. Martin Luther King Jr. monument on Hardin Street.

Along with the walkers there were 12 riding in vehicles and two golf carts full of people escorted by the Opp Police Department.

“Martin lived, fought and died so that you can have the rights. We have to move forward, keep on and not stop,” Mayor Becky Bracke said before the group marched toward the monument.

“The world is never going to be perfect. If we stop we will accomplish nothing. We have to teach our children to fight evil not people.”

Once the group met at the monument, they set up a portrait of MLK and read quotes from his speeches.