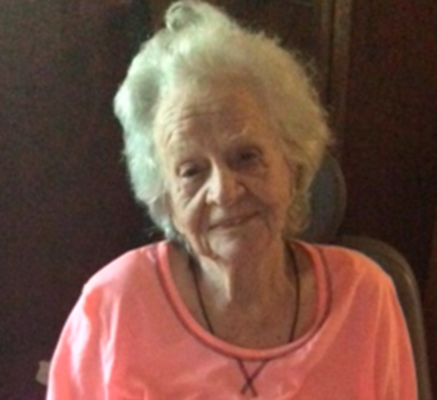 A Red Level woman turning 100 credits her longevity to sewing.

Born in 1918, Lucy has almost lived an entire century.

One of 13 children born to Jeptha and Leona Sharp, she was born in Loango, but moved with her family to Red Level when she was 9.

Ronnie Kilgore, one of her three sons, said that Lucy spent 95 out of her 100 years sewing.

“She picked up sewing at around five or six,” he said.

In her younger years, Lucy sewed clothes for her dolls, then helped her classmates in home economics class at Red Level School.

“She went on to work at Andala and Alatex,” Ronnie said.

“I was just really happy to have a job,” Lucy said.

After their third son was born in 1947, Lucy began working from home.

“She went through several Singer sewing machines. When I say Singer, I mean the ones you pedal with your foot. So she has one leg bigger than the other. You can tell where her hand was on all of her old sewing machines,” Ronnie said.

Lucy started with embroidery on her husband’s work shirts, which turned into her sewing most work shirts for men who worked with her husband.

“I remember helping her with probably 150 shirts,” Ronnie said.

From there, her clientele only grew.

“She started sewing up prom and wedding dresses,” Ronnie said.

There wasn’t a design Lucy couldn’t sew, he said.

“A lady came to us with a design for a dress, but she wanted the back of the dress designed off of a magazine picture.”

She asked Lucy if it could be done and Lucy responded with, “Oh yes.”

Lucy’s least favorite thing to do was take in suits, Ronnie said.

“She’s amazing at sewing. She would go to sleep not knowing how to sew something but wake up in the middle of the night, ready to sew,” he said.

Although Lucy doesn’t sew as much as she did, she still has a passion for it.

“Sewing keeps your mind off the aches and pains. I still like to sew,” Lucy said.

Not only can she sew, Ronnie said.

“She can also count down the states starting with Maryland,” he said.

Lucy’s birthday celebration will be held on Sun., Jan. 28 from 2-4 p.m. at the River Falls Baptist Church. The family requests only the gift of the presence of friends.