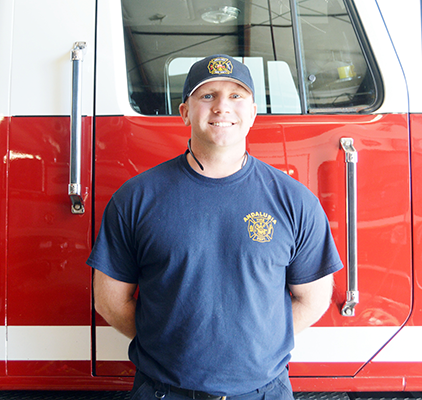 Tyler Wilson is a 2004 graduate of Andalusia High School and somewhat of a star. After high school, Wilson played baseball for the Atlanta Braves and the Pensacola Pelicans as a pitcher.

After that, Wilson spent a lot of time coaching for Andalusia for baseball and football.

Wilson started working for the fire department in January.

“I did a lot of research into the department before I actually applied,” he said.

“I talked to a lot of guys from here and they gave me solid advice.”

Wilson said that baseball and firefighting have one similarity.

“There’s a team mentality in firefighting that is similar to what I had when I was a part of a baseball team.”

Within the first two hours of his first day on the job, there were two structure fires, back-to-back.

Within four of Wilson’s shifts, there were three structure fires.

“I earned the nickname ‘Black Cloud’ for a little while,” Wilson joked.

Despite all of that, Wilson said he looks forward to working at the fire department and loves the work he does.

“This is honestly the best job I’ve ever had,” Wilson said.