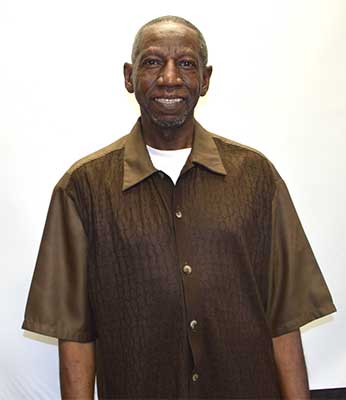 For Tommie James, sitting at the Woolworth’s counter in 1968 might have been his first stand, but it wasn’t his last. In fact, he’s spent most of his life standing up for his race.

“In 1968, I had just got out of high school. I became involved with the NAACP, as a field agent with my sister,” James said.

“That was around the time they started to integrate high schools and allow black people into most places,” he said.

“We communicated with the principal of the high school and helped the students with any issues they had,” he said.

James had attended Woodson High School, an all African American school in Andalusia.

Just after he graduated, integration began.

“I remember, before the law had passed, about three or four of us field agents would go inside the Woolworth’s and walk around. Back then we couldn’t purchase what we wanted in the store. We had to wait outside,” James said.

“There was this white lady who would follow us around the store, thinking we would steal something. So, we always split up so she couldn’t follow us all.”

When the law finally passed, James and his sister went into Woolworth’s one afternoon.

They walked right up to the lunch counter and sat down.

“It wasn’t really busy that day. We sat down at the counter and the same lady that followed us around the store was serving that day. We tried to get her attention and she at first ignored us,” James said.

Once they finally gained her attention, they ordered a coke.

“We demanded for it to be put in an actual glass,” James said.

“I remember her being very receptive, she didn’t argue. She gave us our coke. By then, other white people were coming in and they made sure to sit away from us.”

After that, James and his sister would go there often.

“Each time we went the way they treated us got better and better,” he said.

But that wasn’t the most significant thing James overcame in his life.

Just out of high school, James worked as a nursing assistant at the Columbia General Hospital in Andalusia. He had plans to be a nurse one day.

“Back then, black people were only allowed to pass medicine. We couldn’t give shots,” James said.

“A white lady was in a lot of pain and wanted something to stop it. Her remedy was an injection, or a shot. So, I went and got the shot and walked into her room. She pulled up her nightgown for me, and pointed where she wanted me to administer the shot.”

Later, James was confronted by the director of the hospital.

“The lady told the director that I came in, flipped her over and gave her the injection. I was threatened to be hanged and killed if I ever did that to another white patient.”

Shortly after, James went on to Troy State to major in nursing. With no co-ed dorms, James had to find an apartment downtown.

Because of that, James struggled with his studies, leading him to eventually fail out of the nursing program. He didn’t give up, and continued to pursue an education.

“I applied for the criminal justice program and I was amongst the first 25 blacks to be in the program,” he said.

“We had to stick together as a group. The other students would call us monkeys and niggers. They didn’t really accept us.”

Once James graduated, he went on to look for a job in Mobile with the youth court.

After finding out there was a freeze on jobs he decided to go back to school for what he really wanted to do.

“My mother always told me that regardless of what obstacles you face, if you want it bad enough, you’ll go for it,” he said.

James went to Douglas MacArthur and enrolled in the LPN program in 1977.

“I was the first black male to ever complete the LPN program,” he said.

James continued to earn his doctorates in nursing all while working at Virginia College and Fortis College.

James retired from Fortis College and now works at Mizell Memorial Hospital in Opp as a night supervisor.

If James had a chance, he wouldn’t change how he was brought up.

“Everything that happened to me in my younger years made me strive harder to be the best that I can be. I can do the same thing as everyone else. I am a minority and I have proved I can do it. I never thought badly about the people who hated us, I just saw it as they didn’t know any better. We’re the same.”