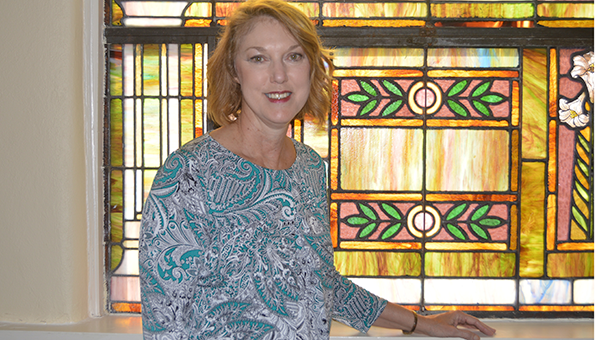 Glaize stands in the sanctuary of the First United Methodist Church, where she recently became the minister of education. Courtesy photo

Alecia Glaize is new to Andalusia’s First United Methodist Church, but she’s not new to the ministry.

“I started on March 1 as the minister of education,” Alecia Glaize said. “So far I’m happy and motivated here.”

Glaize has been a part of the Methodist Church since as long as she can remember. A native of Glenwood, she said she first felt a call to ministry while work at Blue Lake Methodist Camp in her teen years.

“I didn’t feel a call to preaching but more to teach,” she said.

After graduating from Brantley High School, Glaize went on to study at Huntingdon College with a major in religion and a concentration in Christian education, and later attended grad school. Glaize spent most of her life as a youth director

“I’m new to this position but I’m not new to Christian education,” Glaize said.

As a minister of education, Glaize is responsible for programs for children and youth.

“I’m really passionate about parents and their efforts in trying to raise Christian children,” Glaize said. “I want children to feel like they’re loved, accepted and important. I want them to know that God loves them.”

Glaize has also worked for Habitat For Humanity in Brewton and the Child Advocacy Center in Baldwin County, as a prevention education coordinator.

She says that her most recent employers have opened her eyes more to how people live.

“I’ve learned a lot about families in poverty as well as more about how prevalent sexual abuse is in society,” she said.

Glaize says she looks forward to her time with the First United Methodist Church of Andalusia.

“There’s a lot of good things going on here. There’re lots of volunteers, and part-time staff that are working very hard,” she said.

As for what she plans to do, she said she’ll listen to the people.

“I plan on supporting a lot of programs already here and talking to the parents of the youth and listening to their concerns. I’ll be getting to know the community, the church before I begin formulating plans,” Glaize said.

“My first goal is to plan a fantastic summer for the children in youth. I’m looking to plan mission trips and vacation bible school.”

Glaize said she has been waiting for God’s direction for two years and she thinks that this could be the path He chose for her.

“I’ve been praying about how the Lord wants me to serve in this stage of life. I’ve wanted to work on making the world a better place. I saw the ad for the job and I love the town of Andalusia so it really just seemed like the perfect fit,” she said.

Glaize also says she likes how the church is smaller.

Outside of work, Glaize spends her time with her two dogs at her house on Gantt Lake, experiencing God in nature, hiking, walking, crocheting, and on the weekends, she spends time with her husband, Dr. Ed Glaize, the senior pastor of Fairhope United Methodist Church. She also enjoys spending time with her two children when they’re not away for college.