Almost ready to rodeo: Countdown on in Opp 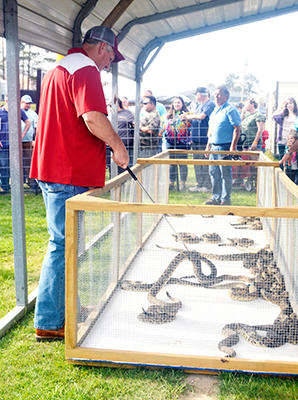 The 58th annual Opp Rattlesnake Rodeo kicks off in two weeks and that means family fun, entertainment and good food.

It also means that there are new things to look forward to this year.

“One of the biggest things for this year’s rodeo is the entertainment on Sunday,” Don Childre said.

“The Charlie Daniels Band will be here and there’s a lot of people coming for them.”

Childre says that Saturday’s entertainment will also be a hit.

“Blackjack Billy is a party band. They play a lot in Club Lavela, you can look them up on YouTube.”

Riley Green, a native of Alabama, also will perform on Saturday.

As far as the rattlesnakes go, there are 36 collected so far.

“We have four more coming in today,” Childre said Monday.

“We try to get at least 50 snakes. This year there’s a little bit of a difference. It’s been a lot warmer so the snakes are out of their holes.”

On the subject of snakes, Childre has a lot to say.

“One thing I would like to say is that we aren’t causing any damage to the snake population,” he said.

“For every 7,500 square miles over the span of five counties we collect one snake. That means that there is a tremendous amount of territory that hasn’t seen a snake hunt.”

Childre says that years ago the rodeo used to do 200 to 300 snakes.

“We don’t do that anymore. We also buy meat from a commercial supplier in Texas,” he said.