Concern about corruption motivated Dawson to run for governor 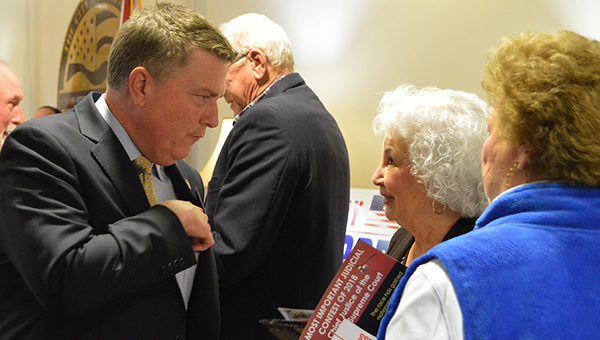 Dawson, a candidate for the Republican nomination for governor, greets well-wishers at a forum in Andalusia on Tuesday. Lacy Stinson/Star-News

In a five-person race for the GOP nomination for governor of Alabama in 2018, there is one thing that makes Scott Dawson different: It’s his first running for any office, ever.

But Dawson is not intimidated.

“I am focused on why I am running, for the 4.8 million Alabamians looking for a leader.”

Dawson was born and reared in Ensley and founded the Scott Dawson Evangelistic Association.

His association concentrates on rallies for all ages and denominations.

Despite his 30 years in ministry, Dawson says that Alabama would be electing a governor, not a minister.

“You are not electing a minister. You are electing a governor. However, because of my background, I have a biblical worldview and that can be beneficial to Alabama.”

Dawson said he de cided he wanted to run for governor when he saw the corruption in Montgomery.

“I wanted to run for governor when I started understanding what’s going on in the history of governors of Alabama. Three out of the last six governors have been removed,” Dawson said.

“To me, you want a governor that casts a vision for a future and can communicate, build a team and build hope for the state.”

Dawson says that what the people need is a leader.

“I’ve heard so many people say that governors should be a business person or a seasoned politician. No. What Alabama needs is a leader,” he said.

“Without vision with a leader who guides it, there can be a lot of problems.”

“I chose Dr. Graham because of his passion, Reagan for the communication and Disney for his creativity,” he said.

Dawson believes that entrepreneurs are too restricted.

“I want young, entrepreneurial minds to start businesses in our state,” he said.

“(They) are discouraged from making their dreams reality because jumping government hoops is no recipe for optimum success.”

“We want to incentivize them to continue to hire,” he said.

As far as taxes go, Dawson believes that taxes should only be collected for goods and services that are necessary for government functions.

Dawson also says there needs to be a major reworking of the budget for Alabama.

“We have to prioritize, evaluate and eliminate non-essentials,” Dawson said.

With that comes a big concern for Dawson, the bridges and roads within Alabama.

“For four decades that I have lived Alabama has always had a road, prison and education problem,” he said.

“I’ve had two cracked windows because of the roads in Alabama.”

The prison issue is overcrowding and state of the facilities.

“We have lost a generation before our eyes in prison,” he said.

Dawson says there is hope beyond bars with his idea to propose partnerships with faith-based communities, non-profit organizations, vocational schools and colleges to offer to prisoners.

One of Dawson’s platform issues is eradicating drug abuse.

“Drug addiction sees no race or gender. It has become a major issue and it is the disintegration of a family. If your crime is being addicted to a drug, we have to get help and restore you back within your community,” he said.

“We don’t have enough help with drug addiction and mental health conditions. We need to treat those that have those problems and give them health.”

Dawson says he plans to eradicate drug addiction in the State of Alabama starting in high school with mandatory drug testing for extracurriculars.

As for how he plans to have this funded, Dawson can make a promise that it would not come from the state.

“It will get sponsors and there will be money raised for the program.”

Dawson is also against the implementation of the lottery within Alabama.

“People think that the lottery will help with income for the state,” Dawson said.

“The educational lottery is not as beneficial as people think.”

Dawson says that in other states, the lottery doesn’t pay for all the supplies needed for schools or even teachers’ pay.

“In Illinois, you can’t even get your winnings in a lump sum. It’s not producing what everyone is saying it will.”

Dawson and his wife, Tara, are the parents of two college-aged children. They live in Birmingham.