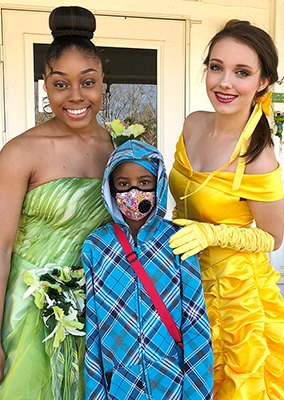 A 9-year-old battling leukemia got the chance to meet her favorite Disney princesses, thanks to Meredith’s Miracles and Comfort Care Hospice.

Andarous Gipson of Greenville was diagnosed with Acute Myeloid Leukemia last year. AML is a type of cancer that starts in the bone marrow and moves quickly to the blood.

“She would come home, lay down and feel tired all the time,” her mother, Trina Gipson said.

Gipson said she thought that was very strange but what really concerned her was her daughter’s nose bleeds.

The next day Gipson took Andarous to the emergency room in Montgomery.

From there, the doctors immediately sent them to Birmingham’s Children Hospital for testing.

“We had a time limit of two hours to be in Birmingham,” Gipson said.

They headed to Birmingham and after a day of testing, Andarous was diagnosed on Nov. 7, 2017.

But the good thing is that it is treatable, Gipson said.

While Andarous went through treatment she was taken out of school and she had to be taken back and forth from Birmingham.

On January 7, doctors told Gipson that there wasn’t much that they could do for Andarous.

“They told me if I brought her home she would be dead in three to four days,” Gipson said.

“But I didn’t want for her to spend her time in the hospital if there was nothing that could be done.”

Gipson brought Andarous home with a catheter and an oxygen tank.

“She went from being in ICU for having fluid in her lungs to coming out of it, all by the grace of God. I believe that God has the last say-so and that’s why she’s still alive.”

After about a month, Andarous had her catheter removed and was taken off of oxygen by the end of February.

Gipson says that prayer helped them push through everything.

But throughout all of this, Andarous found joy in little things. She especially liked the Disney movie, The Princess and the Frog.

Comfort Care Hospice arranged for Andarous to come to the annual Cookies With Characters event to meet with Amaya Bradley, who portrays Princess Tiana for Meredith’s Miracles.

However, Andarous was feeling sick.

“She was running a fever the day we planned on coming to Andalusia so we couldn’t go,” Gipson said. “So they organized to come to our house.”

Gipson said that Andarous was so excited she didn’t know what to say.

“She was surprised, she was really amazed. She loved the Tiana doll that they made for her,” she said.

Not only did Andarous get to meet Princess Tiana, but Rebecca Butts of Comfort Care arranged for a platter of sandwiches and gift bags for the friends who joined Andarous for the big event.

Andarous also got to meet Belle, played by Alyssa Jones.

“It was so sweet. She was so shy, she would just stand with her mom,” Kiley Spears, Cookies with Characters coordinator for Meredith’s Miracles, said. “But she also interacted with us.”

Gipson said it was a great experience for Andarous.

“It just made me so happy to know that people still pray for her and care about her,” she said.

As of now, Andarous will be able to return to school in August once her counts come back up.

Gipson says her daughter is still tired and coping with the loss of her real hair by wearing hats and wigs.

“The hair is not important as long as she’s alive,” Gipson said.