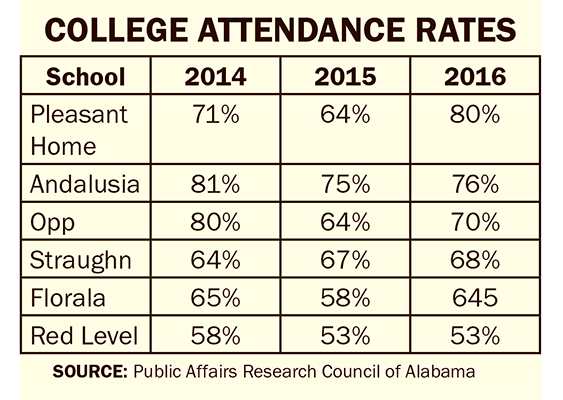 A Covington County high school is among the 19 in the state that had 80 percent or more students attend college in 2016.

Pleasant Home High School had 81 percent of its graduates go on to attend college after graduation with 76 percent enrolling in two-year colleges and 5 percent attend four-year colleges or universities.

The data was collected by the Public Affairs Research Council of Alabama, and is based on 2016 numbers.

Pleasant Home’s college-enrollment rate for that year is almost 20 points higher than the average for Alabama. In 2016, an average of 63 percent of high school students pursued higher education. The state trails the nation in the number of students who pursue higher ed.

For the same data year, Andalusia had 76 percent attend college; Opp had 70 percent; Straughn had 68 percent; Florala had 64 percent; and Red Level had 52 percent.

“We work collaboratively with students, parents, teachers, counselors and administrators to help ensure students have a transition plan in place,” she said.

McKathan said that students are encouraged to participate in the dual enrollment program with LBWCC.

“We encourage them to attend college/career fairs and visit college campuses. Our counselor and career coach work together to keep students informed of opportunities available,” she said.

That includes college deadlines and scholarships they might qualify for, McKathan said.

“Some patterns are predictable: affluent suburban districts tend to send most of their graduates to college at four-year colleges and universities,” the website said.

“In schools where poverty rates are higher, a smaller share of students go on to higher education.”