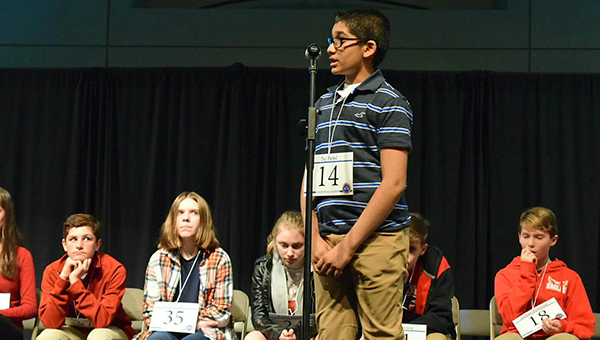 When Straughn’s Taj Patel came in second in the state spelling bee last month, his hopes or participating in the national spelling bee were dashed.

But this week, he learned he’s invited to Washington, after all.

Taj is a winning speller, having won both his school spelling bee and the county bee numerous times. He’s also a grand champion in Isshinryu Karate and can even solve a Rubix cube in less than a minute.

RSVBee was launched just this year to provide more of an opportunity for spellers to participate in the National Finals in Washington, D.C.

RSVBee is a program that makes an extra effort for fairness.

“RSVBee is our sincere effort to take a step toward fairness. We believe the National Finals are as fair as possible, but the path to Bee Week is not consistent or equal journey,” according to the Scripps National Spelling Bee website.

“Throughout our 90-year history, we have had sponsored and unsponsored regions. This means students in a sponsored county have a shot at advancing to the National Finals while students in a neighboring county without a sponsor have no shot.”

The website also says that the sizes of sponsored regions are not created equal and that some states have the ability to only send one speller to the finals while another state may send 10.

“We didn’t expect this to happen. We’re really excited about it. Taj is going to do his best.”

Neil said that it’s another way for students to go on to nationals.

“It’s just another thing that helps children get to the National Spelling Bee,” Neil said.

“Alabama only sends one person to the Scripps National Spelling Bee.”

“There are many spellers who have worked diligently and triumphantly locally and yet because of the restrictions of the program, they don’t get the opportunity on the national stage,” the website said.

RSVBee is a way to bridge the opportunity gap for spellers, the website said.

Neil said that Patel will go through three different preliminary rounds during the course of three days, before the actual spelling bee.

“There will be a vocabulary round, a written round and a spelling round,” Neil said.

Neil says that they will have to travel to Washington, D.C., on May 27 for registration.

“I’m happy that Taj has been given this opportunity,” he said.