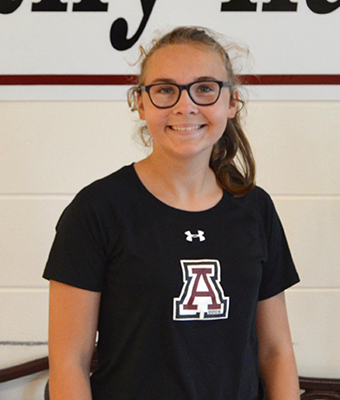 Meleah Treadaway, a seventh grader at AMS, was invited to the Duke talent program after scoring a 27 on the ACT.

Meleah Treadaway, a seventh grader from Andalusia Junior High School, will be one of the students honored by the Duke University Talent Identification Program for scoring a 27 on the American College Testing or ACT.

To qualify for grand recognition, students must earn scores that equal to the 90th national percentile rank for college bound seniors taking the ACT.

Treadaway said that she studied two to three weeks before the exam by taking practice tests.

“I studied a little, but I didn’t go all out for it,” Treadaway said. “Everyone said that I would probably score an 18 through 24, but I definitely went past that.”

Treadaway said that when her family found out, there was a lot of excitement in the room.

“When they found out they all started screaming,” Treadaway said. “They are really proud of me.”

Along with scoring so high on the ACT, Treadaway is a perfect student with her grades being all in the 100’s.

Amy Bryan, one of Treadaway’s teachers, said that she is a very determined and hard-working young lady.

“She is so humble, respectable and not only is she naturally smart, her work ethic pushes her over the top,” Bryan said.

“I am in awe of how smart she is,” Bryan said. “The National Percentile Rank goes only to 99, so for her to score perfectly in reading and one point below perfect in math just really says something about how much of a hard worker she is.”

Bryan said that since the last time Treadaway has taken the Global Scantron Test, she has improved her math score by 220 points and her reading score by 100 points.

Treadaway said that she is already working toward being class valedictorian at Andalusia High School.

Away from school Treadaway is a member of the AJHS softball and volleyball teams and was voted Class Favorite.

Along with being honored in ceremonies, Treadaway will be attending Davidson College this summer as a part of the Duke Summer Studies Program.

She will take a class on the study of DNA: Unlocking the Genetic Code.

“This class was my number one choice,” Treadaway said. “It is mostly because of my science teacher, we were learning about it one day and it really caught my attention.

Treadaway hopes to attend college at the University of Alabama and pursue a degree in forensic analysis.

What started as bruises covering his body for weeks led to a diagnosis of acute leukemia for a Florala man.... read more