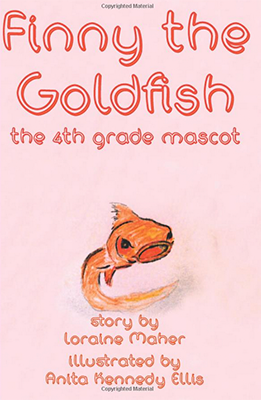 Maher is a retired fourth grade teacher from Michigan and visits Opp six months out of the year to enjoy the warm weather during the winter months.

It was during her visits when Maher decided that she would like to tell a story about her time as a fourth grade teacher.

Ellis has been an artist since 1970 and has taught art classes since 1980. She owns the Piddl’n Paint Studio, where Maher often took classes.

“After several years of knowing each other and numerous art classes together she said she really had a story she wanted to tell,” Ellis said.

“She said, ‘Nita this story keeps going through my mind. I want to tell it.’”

Ellis said that Maher wanted her to draw pictures for it.

“I tried to tell her that I was a painter, not an illustrator. All she said was, ‘You can do it.’”

So the two worked on the book in between the times that Maher would return to Michigan and come back to Opp.

“We worked in between seasons. She gave me the story and I would show her pieces that I’d done,” Ellis said.

“The actual doing of it didn’t take all that time. The drawings didn’t take but a few hours. It was organizing the actual book with the illustrations.”

Ellis said the hardest part for her was matching the illustrations to the story.

“It was a real challenge for me to draw and to illustrate to what she wrote,” she said.

“She likes to call it ‘our book’ but it really was all her idea. Those are her stories I just shared my artwork with it. She’s really amazing, she has such a passion for children.”

There could be future illustrative works for Ellis.

“I really like illustration, now that I’ve done it.”

The book is geared towards children in elementary, has a second grade reading level and tells real stories of Maher’s time as a fourth grade teacher.

The book is available on amazon.com.