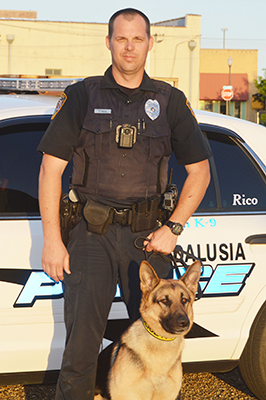 There’s a new addition to the Andalusia Police Department, and he has a four legs and a bushy tail.

K-9 Officer Kevin Norris is the owner and partner of K-9 Rico, and has had him since he was six weeks old.

April 12 was Rico’s official first day on the job, but he’s been riding alongside Norris since October.

“I have experience in K-9 and I’ve always liked the idea of having a working K-9,” Norris said. “I love him, he’s my buddy.”

Norris says that there’s a lot that goes into training a K-9.

“Rico had to go through about eight weeks of training to get his certification to become a narcotics dog. I worked with Phil Dodson to train him,” he said.

“We would have Rico search buildings for narcotics in several different areas so that he didn’t become familiar with areas. We spent a lot of time on Fort Rucker conducting searches on compounds there.”

Norris and Rico went through more than 120 hours of narcotic detection training and achieved a certification with the American Working Dog Association.

Rico was only nine months old when he began his training.

“Usually a K-9 will start training at a year old,” Norris said. “We started Rico out young.”

Since Rico is only 13 months old, Norris plans to wait before they train him as a dual-purpose K-9.

“Right now he’s just certified in narcotics. That means he can detect marijuana, crack/cocaine, meth and heroin. Eventually I’d like to train him as a dual-purpose K-9,” he said.

“That means Rico would be trained in apprehension and tracking down people. We’re going to wait until he matures a little.”

“He never stops and he never has a bad day. He’s dedicated to what he does.”

Norris and Rico have already worked their first drug case together and they’ve been partners for six days.

“He is always on top of things,” Norris said.