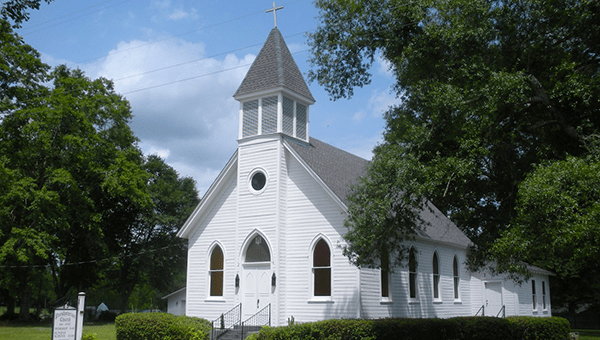 LAUREL HILL — In 1814, so the Johnny Horton song goes, then-Col. Andrew Jackson “took a little trip,” not down the “mighty Mississip’” but almost certainly, historians say, through the area of present-day Laurel Hill while en route to kick the British out of Pensacola.

The Battle of New Orleans — “New Or-leenz,” as Johnny sang it — was to come a bit later.

But 83 years after Col. Jackson’s little trip, the Rev. Luther Wilson of Chipley, a Florida Presbytery evangelist, took a little trip of his own and preached during the summer of 1897 in Laurel Hill, laying the groundwork for the establishment of a Presbyterian Church that would ultimately predate the town’s incorporation by seven years. (Laurel Hill was the new county’s first incorporated municipality.)

On April 24, 1898, the wonderfully-named Rev. Erasmus Ellerbe Ervin, then pastor of First Presbyterian in DeFuniak Springs, organized the Laurel Hill Presbyterian Church with 11 charter members. It was the flourishing railroad town’s second church, a Baptist congregation having been organized the year before Rev. Wilson’s visit.

For the past 120 years, congregations big and small have gathered at Laurel Hill Presbyterian to worship, mourn, celebrate, sing, study and serve their community. At a special 11 a.m. worship service on April 29, the church will celebrate its first century-and-a-fifth.

The church, with their Baptist brethren in Christ, first met in the Masonic Hall. Members soon began constructing a sanctuary on Fourth Street land donated by the Yellow River Railroad, which founded Laurel Hill as its headquarters.

“The Laurel Hill Church owns a good lot, and has about $300.00 in sight for building purposes, not counting $100.00 promised by the Presbytery,” reported the Presbytery’s Home Mission Committee in April 1900.

The new church building opened for worship in 1901, even as the $1,000 construction project was wrapping up, and remains Okaloosa County’s oldest continuously used place of worship.

Sunday services are still held beneath the same high cathedral ceiling in the simple 30-foot by 40-foot sanctuary. Around 1925, a two-room Sunday school addition was added to the rear of the church. One of the rooms was divided into two rooms during renovations in 1956.

A small portable pump organ was purchased in the 1920s for use both at Sunday worship and at the church’s mission in Clear Springs. During a 1960s housecleaning, the little wooden organ was going to be tossed out, but was saved by a member who kept it until 2016, when she returned it to the church. After an extensive refurbishment by Florala, Alabama, organ repairman David Finch, the little organ once again fills the church with its surprisingly rich tones and will be featured during the April 28 120th anniversary worship celebration.