The victim in this accident was air lifted from the scene. Courtesy photo

First responders had a busy day on Tuesday when two car accidents occurred within minutes of each other, resulting in a fatality at the first accident, and the victim in the second being airlifted from the scene.

The first accident occurred on Hwy. 29 just past Oakey Street at about 7:40 a.m. Gantt Fire and Rescue arrived first on the scene. 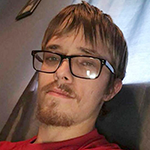 The first accident occurred when a Ford F350 truck pulling a trailer and travelling northbound collided with a Chevrolet Silverado attempting to exit a private driveway. Allen Kyle Raupach, 19, of Dozier, who was driving the Chevrolet, died in the crash.

The driver of the Ford F350 was identified as William Allen Erwin, 44, of Andalusia. Erwin and a passenger were transported by ground ambulance to Andalusia Regional Hospital.

“I was there pretty quick to set up life flight when I got another dispatch,” Fight said.

Fight said he took one engine one down to the second accident, which occurred in Clearview at 7:50 a.m.

A man had lost control of his vehicle and crashed into a tree, Fight said.

Firefighters used the jaws of life to rescue him from the vehicle. The air ambulance originally called to the first scene transported the victim from the scene.

“Gantt Fire had about two engines there, River Falls had two engines and Heath had one engine. Haynes Life Flight and Haynes EMS were on both scenes. We also had Advanced EMS, Gantt Police Department and a lot of other law enforcement on scene. There was a lot that went into this. I really appreciate everyone who helped with getting these people aid.”

The accident at Oakey Street and Hwy. 29 blocked traffic for approximately an hour.