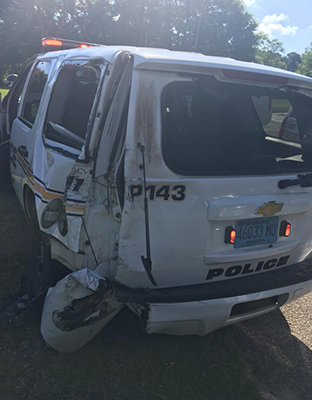 This OPD vehicle was one of three Opp city vehicles damaged Tuesday.

An Andalusia man hit an Opp patrol vehicle and attempted to elude, ending in his arrest with drugs found in his possession on Tuesday morning.

The OPD said an officer was patrolling eastbound on East Stewart Avenue when his vehicle was hit in the rear by a Ford F250 pickup truck.

The driver attempted to flee the patrol car and then hit a trailer being pulled by a City of Opp truck.

A second patrol unit was waiting at the intersection of East Stewart Avenue and Maloy Street for the driver of the Ford.

The driver also hit the second police vehicle before officers surrounded his vehicle and removed him.

Two officers were injured and both were treated at the Mizell Memorial Hospital Emergency Room.

The suspect, Janerious M. Carter, 24, of Andalusia, was charged with assault II, possession of controlled substance, possession of drug paraphernalia, as well as attempting to elude law enforcement. His bond was set at $95,000.

Officers found “spice”, which is synthetic marijuana, located inside of his truck.