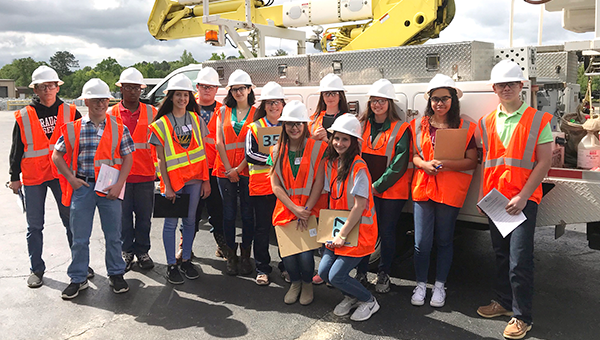 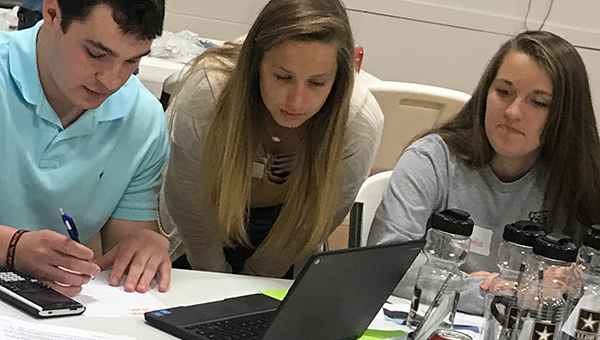 Victoria Kilpatrick asks about the poles while Lea Cooke explains at Covington Electric; 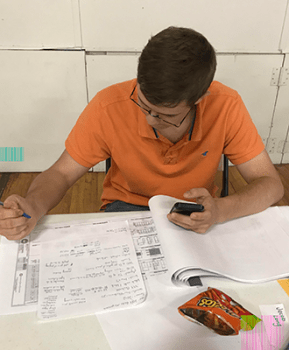 Jacob Long works on a project with Wyatt Sasser Construction.

County students get taste of life
in engineering careers

More than 97 Covington County high school students with the top test scores in mathematics and science got a unique opportunity Friday: They went to work.

Engineering Day was created to show students the many jobs available within the field, Nicki Guilford, the curriculum coordinator for the district, said.

“We sent a test out to all the county schools,” Guilford said.

“Those who scored within the top 10 percent were picked to go to nine different businesses where engineering jobs are needed,” she said.

The students met at the Covington County Board of Education office, where they were divided into groups.

“In their envelope they would either be going to Power South, Covington Electric, Southeast Gas, Arclin, MacArthur, Goodyn Mills and Cawood, Southern Engineering Solutions, Wyatt Sasser or Bailey’s Pharmacy.”

The students were given time to meet their new “coworkers” and head off to their new “jobs” for the next two hours.

“At their jobs, they were given hands-on experience on what it’s like to work at that specific business by engineers,” Guilford said.

While at their jobs, students were also tasked with solving a problem given to them by their “employer.”

“Each business came up with a hypothetical problem that the students had to break up into teams and attempt to solve within a week. Power South tasked the students with coming up with the best location to place a substation,” Guilford said.

“Southeast Gas wanted the students to come up with a better solution in running gas lines, such as materials. Goodwyn Mills and Cawood wanted to expand 1,000 feet to a runway and have students find a way to do that safely.”

At Arclin, students learned more about chemical engineering and were asked to come up with a way to dilute salt water to the right concentration with an algebraic equation.

Southern Engineering Solutions asked the students to come up with a good area to place a hypothetical splash pad by following a budget and design.

MacArthur sent students back with robotic parts to build and program a robot.

Wyatt Sasser brought students to the Andalusia High School stadium to come up with a cost analysis for a ticket booth.

Bailey’s Pharmacy had a chemical engineering problem for the students, finding the right prescription for a person who takes multiple prescriptions.

“The students were told exactly what they needed to do. They needed to solve the problem, take pictures and come up with a public relations piece to present a week later to a representative from each company,” Guilford said.

“For the rest of the week, it’s up to them to network and work on the project together. Whether in person, on FaceTime or however they can stay in contact.”

On Fri., May 4, the students will pitch their solutions to each company.

“They’re also competing with other groups who are doing the same project,” Guilford said.

“I can tell that it’s already got them interested in engineering careers. They came back from their hands-on experience and really started working on their projects.”

May 4 isn’t just a day for them to pitch their ideas, Guilford said. It’s also a day to be even more inspired about a potential job in the engineering field.

“There will be representatives from four different universities attending to talk about the different engineering programs each school offers,” she said.

“There will also be a guest speaker there.”

Guilford said that she hopes that this helped students consider engineering for a career.

“This event was just to really give them an idea on what kind of careers engineering offers,” she said.

“I know that some of them left today with new insight on what they wanted to do.”