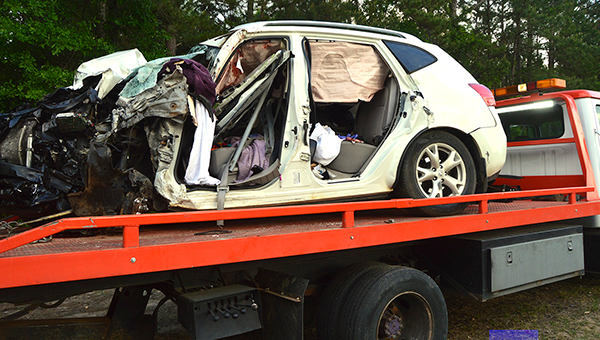 The driver of this Nissan Rogue was air lifted from the scene of a three-vehicle wreck Tuesday afternoon. A dog that was also in the vehicle appeared unharmed. Lacy Stinson/Star-News

U.S. Hwy. 29 was closed Tuesday afternoon as officials worked to removed the wreckage of a three-vehicle accident that spilled a load of gravel onto the highway and resulted in one man being airlifted from the scene.

Witnesses at the scene said a White Nissan Rogue was traveling toward Andalusia on Hwy. 29, when it went off the road. Witnesses said it appeared the driver over corrected and crossed into the northbound lane where he clipped a car, then hit a semi hauling gravel head-on.

The semi jackknifed and dumped gravel across the highway.

The driver of the Rogue, who had not been identified by Troopers when The Star-News went to press, was air lifted from the scene. A dog that was in his vehicle was unharmed.

The Rogue, shown above, collided head on with his semi, which jackknifed, spilling more than 25 tons of limestone.
Lacy Stinson/Star-News

Neither of the other drivers was injured. Family members on the scene said the semi was driven by Russell Worley.

Alabama Department of Transportation officials responded to the scene with front end loaders, a Bobcat and street sweeping equipment to remove the 25 to 30 tons of limestone from the roadway.