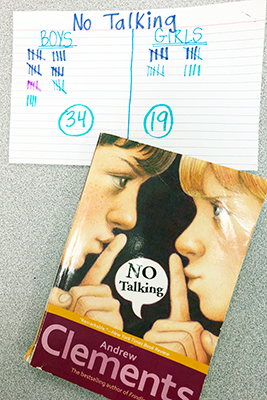 They were inspired by the book “No Talking,” by Andrew Clements, which is a book about fifth graders who realize that they are way too loud.

Jessica Tucker’s homeroom class decided to take the challenge themselves.

“In the book, the main character is doing a report on India so he learns about Ghandi,” Tucker said.

“He learns that once a week, Ghandi would spend a day in silence.”

“The students were allowed to say three words or less but only if a teacher called on them directly,” Tucker said.

“Anything over three words is illegal and will get a tally against their teams.”

Following the challenge like it is in the book while taking tallies, Tucker’s homeroom spent more than an hour talking in three-word sentences and in silence.

“It just teaches the students how to be careful in choosing their words to get across what they want to say,” Tucker said.

“It also showed them the power of words and in words to get across exactly what they wanted to express.”

Tucker said the students had a great time and put a lot of thought into what they said.

“For fun, we went around the classroom, picking on a random kid to give three words for a story the whole classroom finished only using three words per person.”

As for the challenge itself, the girls won, 19 tallies to 34.

“It was just really hard to be quiet,” Amber Nguyen said.

“And if the boys annoy you like they usually do it’s even harder,” Kylie Anderson said.

“It was really exciting though,” Shambresha Woods said.

“I learned that we actually say a lot more words than we need to. It helped us see how much we really do talk,” Woods said.