Firefighters from three departments worked for more than four hours to douse this warehouse fire Wednesday. 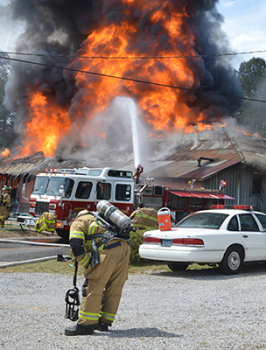 A firefighter takes a deep breath after working to control the flames.

Firefighters watch the mostly-extinguished fire in the warehouse. 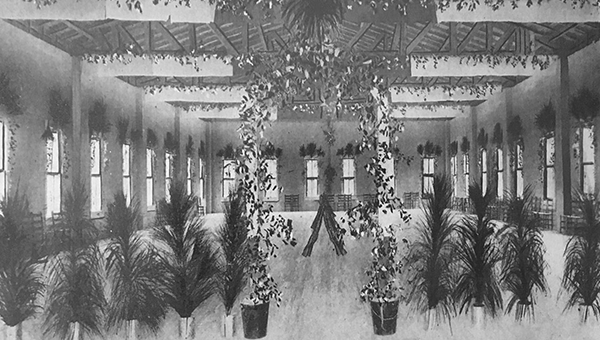 This image shows the interior of the armory build here in 1925, apparently decorated for a special event. 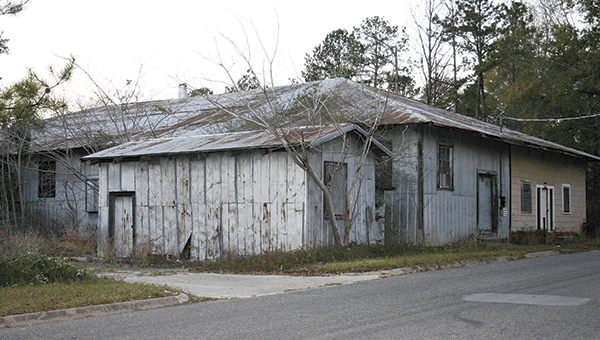 This 2007 Star-News file photo shows the exterior of the building as it most recently appeared.

Cause not determined; no injuries

Firefighters from three area departments spent more than four hours Wednesday afternoon dousing the flames of a warehouse located at 210 Through Street.

The building, currently owned by Mike Noel, was a large warehouse. It was built in 1925 as an armory, but also had been the home of Southern Craftsman Furniture, and Pollock Plumbing Supply, local historian Sue Bass Wilson said.

Both a neighbor and an Andalusia police officer noticed the smoke and called it in around 2:10 p.m.

“I think it’s the biggest fire we’ve had in a while,” Capt. Shannon Kelley of the Andalusia Fire Department said.

“The warehouse was made of heart pine and it burned up quickly,” he said.

Kelley said that there was heavy fire in the back left corner of the building.

Residents of the structure, Shanna Beasley and Shane Roten, arrived on scene shortly after firefighters arrived. The couple had made an apartment in the rear of the warehouse, with the front half of it storing equipment for Roten’s construction business.

“We were working on a house just down the street when we saw the smoke,” Beasley said. “We didn’t know whether or not it was our apartment in the warehouse and when we got here, it was.”

Next to the warehouse were two campers and a pickup truck.

One of the campers burned, and the pickup truck had some fire damage.

“We just heard all the fire trucks and came right away,” Roten said. “All my tools for my company is in there.”

At 6:40, Andalusia firefighters were still working to put out hotspots within the crumbled structure.

The city sent out a front- end loader to push the remaining walls into the structure.

Kelley said that the building would be continuously checked throughout the night to ensure it did not reignite.

The building was deemed a total loss. The cause of the fire was undetermined.