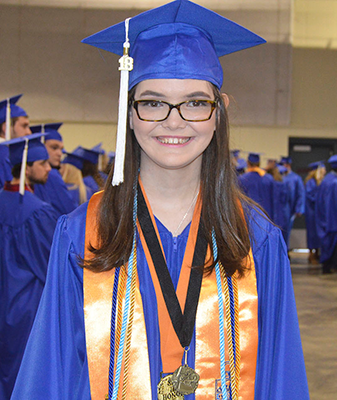 An LBW Community College graduate has community college to thank for her confidence and a full tuition scholarship to the University of Alabama.

“When I first graduated high school from Andalusia, I was really shy. I didn’t have the confidence I needed to go on to a four year university,” Tessa Worley said.

“LBW taught me so much about how you need other people in your life.”

Once Worley enrolled at LBWCC, she joined several different clubs to work on her confidence.

“I was involved with SGA, PTK and those clubs helped me meet new people, socialize and come out of my shell,” she said.

Worley said that she learned at LBW that involvement is an important asset.

Her favorite memories of LBW involve club activities and spending time with people.

“The worst thing you can do is to not be involved at a college,” she said.

“If you’re not making an impact where you are, then what’s the point?”

Worley said she thought about where she wanted to go next to finish her elementary education degree.

Worley said she initially thought of going to Troy University but after finding out she received a full tuition paid Community College Honor Scholarship, she chose the University of Alabama.

Worley’s interest in elementary education began when she was in middle school.

“I always loved singing. I wanted to be singer but my grandparents told me I had to choose a more practical job, and I always loved children,” she said.

“So then that’s when I decided on elementary education.”

Besides a passion for children, Worley loves her family, writing and singing.

Worley’s advice for incoming LBWCC freshmen is to stay involved.

“Don’t let confidence hold you back. The worst thing you can do is to not be involved,” she said.

To the editor: On Monday afternoon, my husband and I returned home from a quick trip to the post office... read more