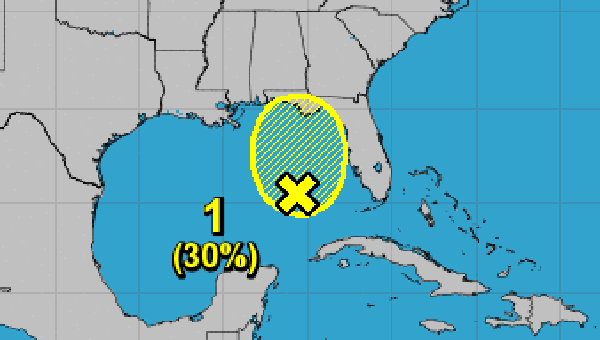 It’s more than two weeks until the official beginning of hurricane season, but the National Hurricane Center had its eye on a disturbance in the Gulf this weekend.

Forecasters gave the system a 30 percent chance of forming into a tropical storm, but by last night, the chance had decreased to 10 percent.

The system is expected to bring heavy rainfall and possible flash flooding to portions of Florida and Alabama.

Although heavy rainfall is expected, the storms will not be continuous.

Some rain can be expected on Tuesday, with heavier rain Wednesday through Friday. The conditions are expected to continue through the weekend.

The temperatures will remain in the 80s, but will be slightly cooler because of the storm system.

For more information, go to https://www.nhc.noaa.gov/gtwo.php.