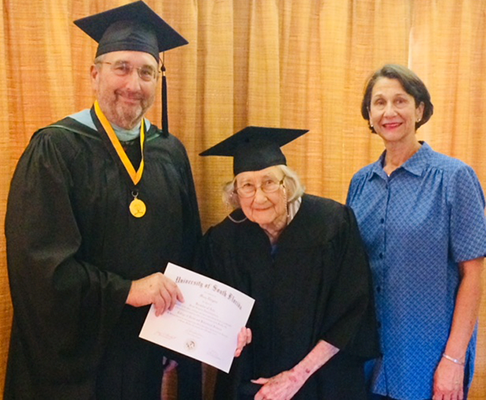 The 1943 RLHS valedictorian began her college journey at the University of Alabama in the fall of 1944, during World War II. She hoped to be a clothing designer.

“Money for college ran out after a year of classes,” Mrs. Thigpen said.

Not only that, but her father also passed away.

“So I came back to the area and began looking for a job.”

Luckily, Mrs. Thigpen quickly found a job at the Andalusia Employment office. While working there, she met her future husband, Duncan Thigpen.

“He came into see about getting unemployment because he just returned from the military,” she said. “But he ended up just asking me for a date.”

The two married in 1948, and Mrs. Thigpen worked to support Duncan while he earned a degree in agriculture at Auburn University.

“He was using his G.I. Bill to go to school while I worked in Auburn,” she said.

They also started a family, and had two children.

“He got offered a job in central Florida and we moved down that way,” Mrs .Thigpen said. “That’s when my children were a little older and I told Duncan that he could work while I go back to school.”

In 1970, she graduated and her son, Jim, started classes there.

“Then I started driving from Bushnell to Tampa just about every day,” Mrs. Thigpen said.

She was studying Interdisciplinary Social Science at the University of South Florida.

“I was offered a job in 1973 and I was lacking one course to graduate. I wasn’t too worried about it at the time,” she said.

If it weren’t for her son and daughter, Mrs. Thigpen said she might’ve never gotten her degree.

“Julie decided that it’d be a good thing for me to have a degree and I said it would be nice, but I never expected it to happen.”

Her daughter, Julie Wells, wrote to the University of South Florida explaining her mother’s story. The college replied and asked that Thigpen reapply so they could review her records. After reapplying, she received a letter on April 23.

The college requested that her degree be conferred.

On Mon., May 7, Mrs. Thigpen’s children held a small graduation for her at her home. At the ceremony, she received a diploma dated 1973.

“It just feels really nice for me to finally get my degree,” Mrs. Thigpen said.

Mrs. Thigpen’s children inherited their mother’s appreciation of education. Wells is a retired elementary school teacher and Thigpen is an associate dean at Pasco-Hernando

State College in Spring Hill, Fla. Both earned masters degrees. Thigpen is also a University of South Florida Graduate and donned his academic regalia to present his mother with her diploma.