West has roles as deputy, chief 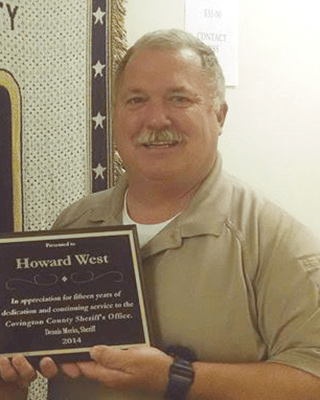 Editor’s note: This is the third in a series about officers for Law Enforcement Memorial Week.

Howard West’s love for people has driven him to work not one, but two law enforcement jobs.

West works in both the Covington County Sheriff’s Department and as the Red Level chief of police.

But his love for law enforcement began way before he was old enough to become an officer.

“As a child, I grew up in Pensacola and I used to watch the security guards in the grocery stores and I met good officers from the Pensacola Police Department,” he said.

And even before then, West had dreamed of becoming a police officer.

“Ever since I was a kid I wanted to be a police officer,” he said.

Right out of high school, West joined the U.S. Army and had hopes to be an MP.

“I was too short to be a military police,” he said.

West spent 20 years in the military before retiring and moving to Covington County.

“In 1995, I started at the Covington County Jail as corrections,” he said.

From then, he transitioned to a fulltime patrolman.

Since then, West has been a part of criminal investigations and is currently the patrol supervisor for the CCSO. In 2007, West also became the Red Level chief.

That meant that 40 hours of his time was spent working at the Covington County Sheriff’s Department and 20 hours being the Red Level chief .

On how he juggles the hours, West says it’s not so bad.

“I just work between the two. It’s a standard schedule,” he said. “It’s just one of those things. I’ve been blessed with a good family.”

The toughest part of his job is separation of family cases.

“It’s tough with the separations of families and children or seeing the children of victims.”

“I just love helping people and serving the community,” he said. “I’ve learned so much in my time in law enforcement. I learned how to care for people better, understand others and the problems they go through.”