Competitive nature pays off for Jackson 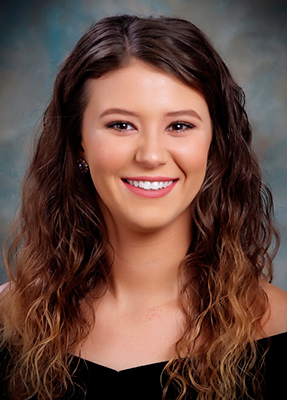 Clayti Morgan Jackson’s goal has always been to become valedictorian of her graduating class.

“I’ve always been pretty competitive,” Jackson said. “I always had this goal set to be valedictorian.”

She said the competition between the top students made her strive harder.

“It was always competition between the top three students, but that made me strive harder because it was always something to work for,” she said.

Jackson said she worked together with her classmates and studied hard to achieve her goal.

“I worked closely with my classmates, and we studied a lot together,” she said.

Jackson plans to attend Lurleen B. Wallace Community College in Andalusia for two years before going on to Troy to pursue a degree in secondary education in mathematics.

“I plan on being a high school math teacher,” she said. “I absolutely love math.”

Jackson said her love for math made it favorite subject.

“My favorite teacher is probably Mrs. Ward, just because she always gave me positive advice and inspired me,” she said.

Jackson said her brother also inspired her.
“He’s just someone I’ve always looked up to because he’s always been there and he’s a really good role model.”

Jackson’s advice for incoming high school students is to take it seriously.

“I’m definitely going to miss the activity side of high school, the friendships and the memories,” she said. “Even if they’re bad memories, they’re still memories of my experience.
“At the same time, I know that high school is only the beginning to whatever is next.”