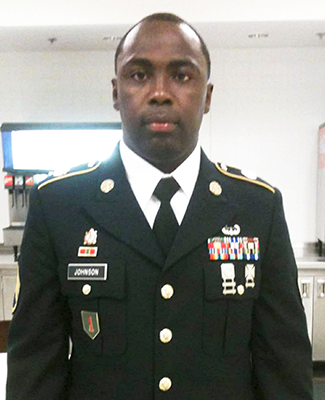 Years of dedication to the military recently paid off for Andalusia native Joshua Johnson when he earned the rank of Sergeant First Class.

“I wanted to join the military after 9/11. I was a senior in high school when the tragic event occurred,” Johnson said of his 15 years in the military. “I also joined to make my mother proud.”

As a small arms repairer, he is expected to provide general support and maintenance on small arms and other infantry weapons.

In his time in the military, Johnson has been stationed in Germany, Kentucky, Virginia and Korea.

Johnson said the entire process for promotion to Sergeant First Class is long.

“The process was four months. To get promoted to this rank, you have to be board selected by a panel of Command Sergeant Majors,” he said.

“I was excited when I found out I was getting promoted.”

Johnson said that his time in the military has changed him.

“The military has shaped me into a man, I was a little boy when I joined at only 18 years old,” he said.
“I didn’t know what I wanted to do with my life. It’s helped to put structure and leadership skills in my everyday thinking.”

It couldn’t be done without hard work.
“I earned this through hard work and dedication to the Army,” he said. “You have to be willing to put in the work if you are making this into a career.”

Johnson has advice for those looking to join the military.

“You will get out what you put in to the military, the military is hard, I won’t tell anyone it isn’t,” he said.
Between deployments and other things that take time away from family, it can be difficult.
“But it’s very rewarding, with promotions, traveling the world and morale boosting events. You have to be willing to put in the work if you are thinking about making this a career,” he said.

Johnson already has his next goal set.

“I want to complete my associate’s degree and work my way towards getting promoted to Master Sergeant.”

Johnson and his wife, Ashley, have two sons, Jordan and Jakahi, as well as a daughter on the way.