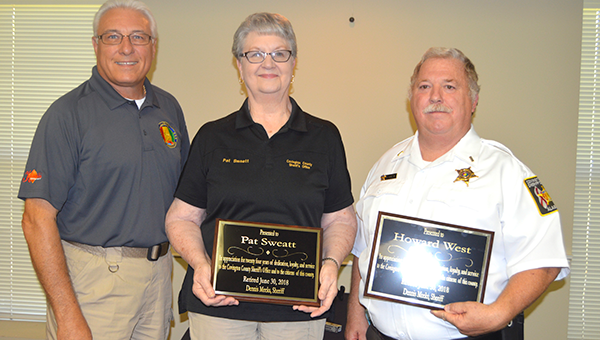 Sheriff Dennis Meeks with Pat Sweatt and Howard West at their retirement ceremony.

Chief Clerk Patt Sweatt and Lieutenant Howard West have worked alongside each other for more than 20 years, Sweatt was hired in 1994 and West was hired in 1995. On Thursday, they were feted with a retirement party.

“I started out at the Covington County Jail because there were no patrol positions available,” West said.

“I left from the jail and patrolled River Falls. Around 1998, I was hired on as a deputy.”

Sweatt worked at the People’s Bank of Red Level for 27 years when Wilbur Mitchell approached her about working for the Covington County.

“I told him I would consider it. I left the bank on a Saturday and started work at the Covington County Sheriff’s Office on a Monday,” Sweatt said.

“It was a lot different than working at the bank.”

Throughout the years both Sweatt and West have worked different jobs within the department.

Sweatt said she’d considered retiring for a while but her goal was to have 25 years. When she heard of West’s retirement plans, she figured it’d be as good time as any.

Sweatt spent 24 years with the office while West spent more than 21 years.

“I wanted to retire early enough so that I was still healthy to go and do the things I wanted to do,” she said.

Sweatt says she plans to travel and spend more time with her family.

“I want to travel a little. Maybe go to Georgia, where my daughter lives.”

West said he knew it was time to take a step back and have quality time with his family as well.

“I will still be working in Red Level as an officer part time, but retiring allows me to focus on my family,” he said.

Sweatt and West both said it was hard to say goodbye to an office full of people they knew for so long.

“I will miss everybody. I’ll miss the sheriff,” Sweatt said.

West he thanked everyone he worked with.

“I am privileged and honored to work with Sheriff Meeks. I appreciate David Anderson. I am blessed to have worked here. I’ve had a lot of good memories.”

Sheriff Dennis Meeks thanked both West and Sweatt for their time and dedication.

“We all started around the same time,” Meeks said.

“Pat did a great job of keeping all of us straight. When Howard said he was retiring, no one believed it. It will definitely be different around here without them.”

Getting ready for Jamz

City of Andalusia workers were busy on Thursday setting up the stage for the Andalusia Area Chamber of Commerce’s summer... read more