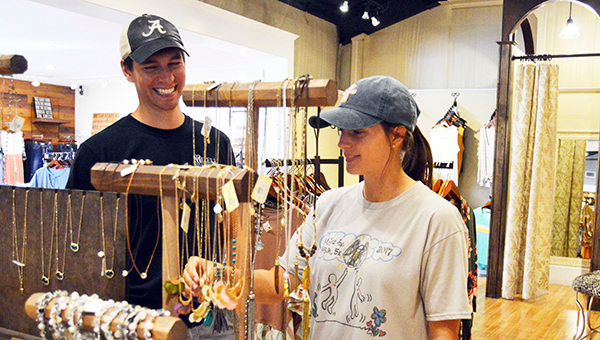 Local businesses said Alabama’s Back To School Tax Holiday got off to a good start Friday, but they expected traffic to pick up as the work week ended.

Shirts were a popular item at Ward and Co. Friday.

“People have been coming in and out of the store, we’ve had good traffic. The start of school is coming up quick so lots of people are buying clothing,” owner Mike Ward said. “It’s going to be a busy day.”

The boutique at Salon Utopia also was busy, but crowds were expected to pick up.

“It’s been steady but it hasn’t been rushed. We’re looking forward to bigger crowds,” Suzanne Lunsford, the owner, said.

“It’s steady, not too busy. People really aren’t off work yet, so that’s why,” Kayla Wilcox said.

“It’s been pretty busy today. We’ve been putting out or new Jadelynn Brooke items. Our journals, backpacks, lunch boxes, lanyards, shirts and pens are all out for people to purchase,” Angel Carter, a cashier at the Pink Peppers, said.

Town and Country had a busy morning.

At Lena Ellen, they were putting out new shipments throughout the day so customers will be able to get exactly what they need.

“We have been very busy. We’re trying to put out new clothes as we go throughout the day so that we’re prepared. We’re excited,” Daphne Hardage, the owner, said.