This weekend, we celebrate veterans 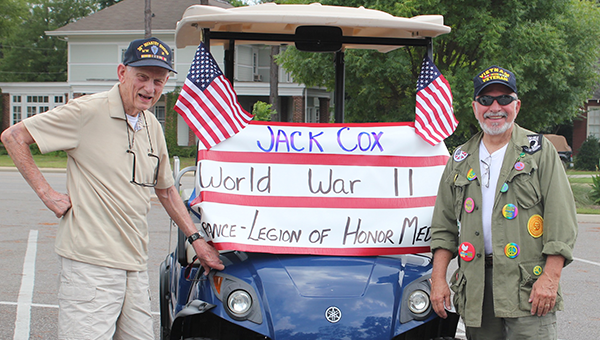 For most of my life, I heard members of our family talk about our daddy’s cousin, Jack Cox. A Florala native, Jack went off to World War II, remained to study in a school for American soldiers in France, and eventually brought home a bride.

While Jack’s life sounded very exotic to children growing up in the rural South, it is only as an adult that I have understood exactly why my father and his siblings – who were a good deal younger than their cousin – were so in awe of him.

Now 92, Jack is charismatic and full of life. But to the generation who grew up just behind him, he, like the thousands of other young men who marched or sailed off to war, who endured conditions beyond most of our imaginations, he was also a hero.

In today’s edition, we include a special Tribute to Veterans that documents the stories of many of those soldiers. I don’t remember when John Vick first suggested the idea to me, but I chose the best words ever: “You’ll have to help us.” Help us, he did! He has worked tirelessly to document the stories of many veterans and to convince others to share the stories of “their” veterans.

He vividly remembers as a young boy living in Red Level seeing rail cars carrying the flag-draped caskets of the American war dead to their families. His appreciation for veterans is unwavering, and this is one of many veterans projects he’s taken on.

After he got busy, he said, “I want you to do this for Veterans Day.” With contributions from many, many people, we did.

Yesterday, he stopped by the office to pick up some advance copies. Within an hour, there were editions in the mail to those who had helped him with material, and he’d already sent me another message: “We need to do this again next year, Lord willing.”

My response is the same, “You’ll have to help us.”

By “you,” I don’t necessarily mean John, but also the family members of the so many veterans who live among us. As we have learned, this process is sometimes time-consuming.

If you have veterans in your family and have not documented their stories, I urge you to be inspired by Becky Powell’s story of her father, a pilot who survived a crash and was a POW. For many years, Harold Pittman didn’t talk about the war. But eventually, his family recorded an “interview” of sorts with him. The story is fascinating.

South of Florala is the grave of a great-grandfather who was a Civil War veteran. My father-in-law’s grave in Ft. Walton pays tribute to his service in Europe in World War I. My father served in the Army in the time between Korea and Vietnam. My husband went to Vietnam. My brother was in Germany when the wall fell.

When we first moved to Andalusia 12 years ago, I was immediately struck by how patriotic the community is. We still say The Pledge in many meetings. We celebrate Memorial Day, Independence Day, and Veterans Day with formal ceremonies. And we hold up as heroes those you served.

God bless all of those who served, and may God continue to bless the United States of America.

No matter what, instinct is there: Put out the paper

Some blessed gifts last a lifetime