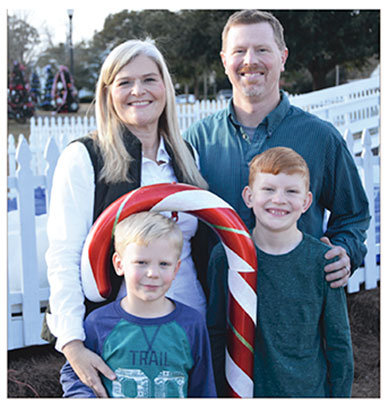 Jena and Daniel Anderson with their sons, Drew, left, and Will. Lacy Stinson/Star-News

They liked Candyland so much, they moved to town

A year after a Mobile family experienced the magic of Candyland in an unplanned visit, Andalusia has four new residents.

Jena and Daniel Anderson decided to move to Andalusia after visiting during last year’s Christmas in Candyland festivities.

“We’re very familiar with the area,” Jena Anderson said. “Dan’s family lives in Brooklyn and we drive through here often to visit my family back home in Colombia, near Dothan.”

“One night we were wanting to try out Big Mike’s in Andalusia, so we came into town. We got to the restaurant they told us about the hour wait so we went up the square,” she said.

Anderson said her two sons, Will and Drew, had lots of fun.

“It was just the cutest, the snow had just started. The boys loved it. They were jumping around and having a great time.”

Anderson said it was then that she knew she wanted to move to Andalusia.

Because of Dan’s job as a chemical engineer, the family could pick where they wanted to live.

“We already had it in our minds that we were going to move somewhere besides Mobile,” she said.

“We were looking at several small towns but I still wasn’t sure until I saw Andalusia.”

The family sold their house in Mobile two months later, and moved to Andalusia in August.

It isn’t all about Candyland for the Andersons, however, it’s about what Andalusia has to offer.

“It’s just so convenient. We love it and the community. Every day I feel like I made the right decision because of how much pride the community has,” she said.

“We love all the pep rallies at the square and those kind of things really let us know that we made the right decision.”

“The boys love their school. There’s so many local shops in town that we love,” she said.

But she said she’s looking forward to discovering more.

“Honestly, we are still finding more reasons to love this town,” she said.

“We discover all these little hidden things that solidifies our decision to move here.”