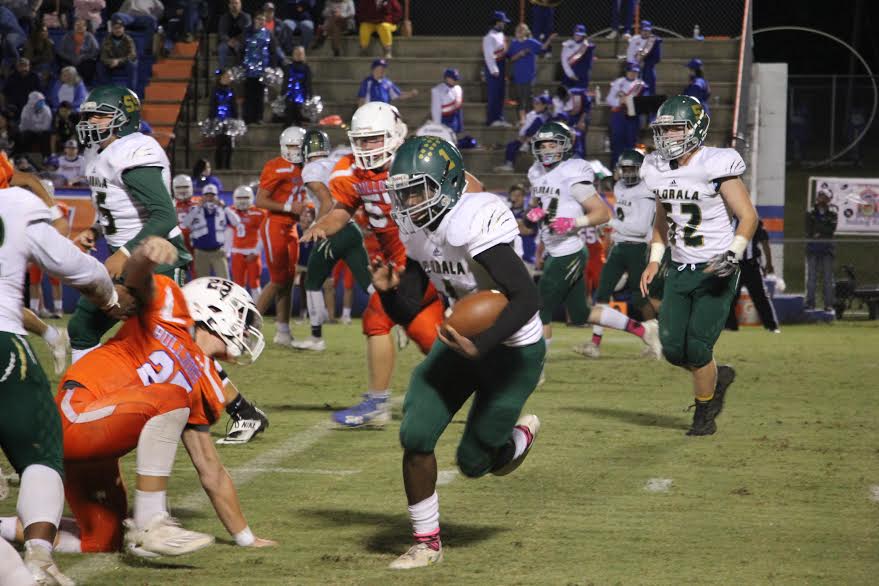 The Florala Wildcats maintained its perfect record with a dominating performance of region opponent Kinston, 50-7.

The Wildcats are 6-0 overall on the season and are 3-0 in 1A’s Region 1. Currently, they sit atop the region along with Brantley, which is also at 3-0.

Florala has displayed the ability to score throughout the season, average 46 points in their first five games. The offense did not let up against the Bulldogs and it began on the Wildcats’ first play. After recovering a Kinston fumble, Florala went straight to the air as quarterback Rashaad Coleman connected with Anthone Stone for a 69-yard touchdown. A two-point conversion attempt failed.

After the defense forced a three-and-out, the Wildcats took possession on their own 26-yard line. Coleman began the drive with another completion to Stone for 11 yards and followed that up with another explosive play, a 63-yard completion to Zacchaeus Reese to the 12. Coleman ran the ball into the end zone to cap off the drive. The two-point conversion attempt was unsuccessful, but Florala had jumped out to a 12-0 lead.

Kinston got on the scoreboard with their next possession. Konner Walker set up the score with a long run, as Addison Hudson finished it off with an 8-yard push into the end zone. The point-after was good, cutting into the Florala lead, 12-7 with just under 2 minutes to play in the first quarter.

Florala increased its lead quickly. On the first play of their next possession, Coleman once again found Stone for a big play, a 55-yard gainer to the KHS 15-yard line. The two connected again on the next play for seven yards. On first-and-goal from the 4-yard line, Reese pushed the ball into the end zone. The Wildcats were successful with a two-point conversion, taking a 20-7 lead into the second quarter.

The Wildcat offense was hampered by penalties on their next possession, but the defense held firm and forced another Kinston punt. After a 9-yard loss on a sack by KHS’s Harley Bigger, Coleman completed a pass to Stone who found a seam in the defense and went 46 yards to the end zone. A two-point conversion attempt failed, but the Wildcats held a 26-6 lead which they would carry into halftime.

While the first half featured a lot of explosive plays through the air, the Wildcats took to the running game for the second half. On their first possession of the half, Reese carried the ball six times for a total of 77 yards, including a 14-yard scamper into the end zone. Reese also got the call on the two-point conversion, which was good, extending the Wildcats’ lead to 34-7.

Another three-and-out by the defense led to the Wildcat offense taking possession near midfield. After a 10-yard completion to Joshua Settles followed by a mark-off for holding, Florala went back to Reese who picked up 22 yards and immediately followed that with a 28-yard run for another touchdown. Settles found a hole on the two-point conversion, lifting Florala to a 42-7 lead with 5:37 to go in the third quarter.

“We played a physical football team,” FHS head coach Chris Littleton said. “Kinston beat us up a little bit and moved the ball on us. We had to use quick strikes to score. So, hats off to them. The score of the game doesn’t reflect how it went.”

“Rashaad Coleman had another big night, Anthone Stone had another big night, as well,” Littleton said. “Zaccheaus Reese had a huge night on both sides of the ball. We just a good night of running and throwing. We felt like we needed to make a statement tonight and that is just what happened. No offense to Kinston, because we have a lot of friends from their, we just had to come out strong and we did that. We still have some work to do, but we are just going to focus on us like we have been doing.”

HOMECOMING SHUTOUT FOR THE BULLDOGS: Andalusia uses a strong…