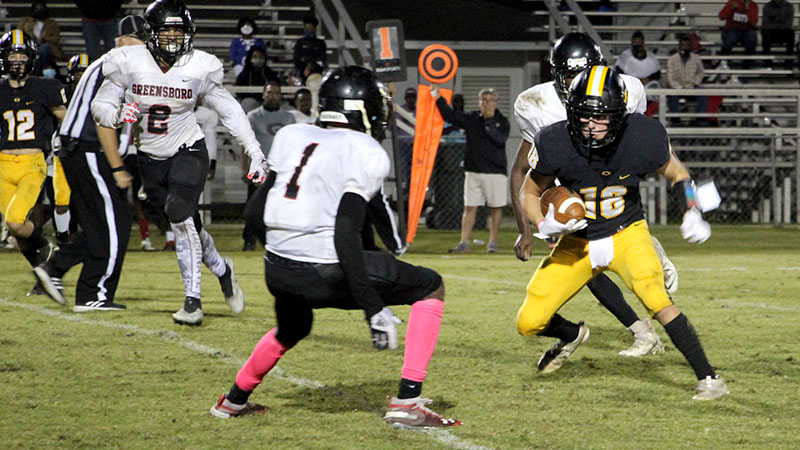 Robbie Gafford looks to shake off a Greensboro defender on a positive gain for the Bobcats.

The Opp Bobcats found themselves in a defensive struggle against the Greensboro Raiders in the first round of the state playoffs, but found enough offense late in the game to come away with a 14-8 victory and advance to Round 2.

The Bobcats and Raiders both played solid defense throughout the contest. It was not until a long drive that began in the third quarter for the Bobcats that led to the first score with 8:55 to go in the game. 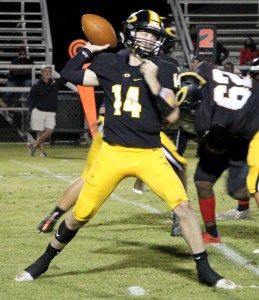 Taking control at the 10-yard line, Bobcat quarterback Hal Smithart began the drive with short pass to Lane Ballard. Payton Ellis picked up 12 yards on two runs to give the Bobcats a first down. A sack on second down backed Opp up and brought on a third-and-17, but Smithart found Peyton Ellis open who found running room down the sideline for a 24-yard gain to midfield.

Early in the fourth quarter, Opp continued the drive with consecutive completions, an 8-yard gain to Robbie Gafford and a 10-yarder to Jackson Pierce that put the Bobcats in the red zone for the first time in the game. Two plays later, Smithart hit Zaccheaus Lindsey for a 10-yard completion to the 6-yard line and from there Ellis finished off the drive by barreling into the end zone for the score. Pierce hit the extra point to give Opp the 7-0 lead with 8:55 to go in the game.

Greensboro started their next possession in the hole immediately as Cole Jennings took the quarterback down behind the line of scrimmage for a 5-yard loss. The Raiders could not overcome the deficit and was forced to punt, but the punter muffed on the kick giving the Bobcats another scoring chance from Greensboro 14-yard line.

Opp stayed with the running game as Ellis, Smithart and Pierce each had positive gainers. From the 1-yard line, it was Smithart who powered in for the score giving Opp a 14-0 lead with 4:15 to go in the game.

Greensboro would put together a drive only to turn the ball over on downs. They got another chance after Opp fumbled the ball away with 1:34 to go. The Raiders would go on to score and complete a two-point conversion to make the score 14-8 with only a few seconds remaining on the clock.

With the victory, the Bobcats advance to Round 2 of the 3A playoffs and will travel to Montgomery Catholic, which defeated Bayside Academy in round one, 52-21.