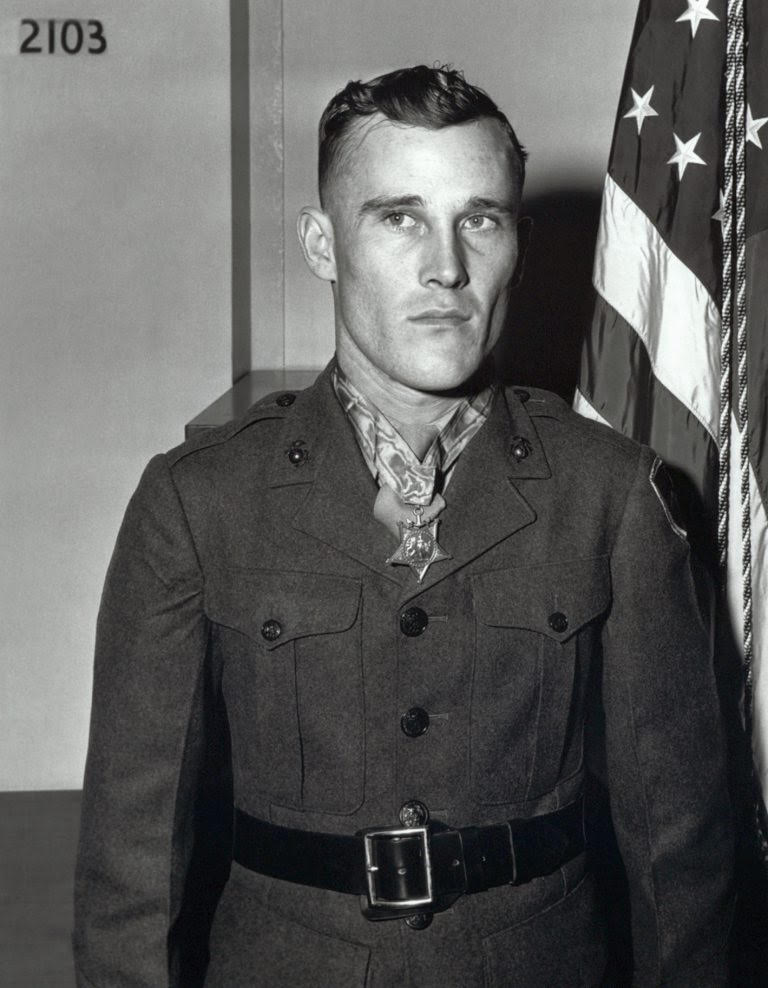 Hell on earth found its home on a tiny, sulfurous island in the Pacific Ocean during a 36-day battle in 1945. The Battle for Iwo Jima was fought over a hellish terrain of black volcanic sand and concealed caves, sometimes hand-to-hand, in a duel to the death. When it was over, only 216 Japanese soldiers of the original 21,000, survived. Of the 70,000 U.S. Marines who fought, 7,000 died and another 20,000 were wounded

Fleet Admiral Chester W. Nimitz, Commander in Chief of the 7th Fleet, said this about the heroic fighting Marines on Iwo Jima: “Among the men who fought on Iwo Jima, uncommon valor was a common virtue.”

Private Wilson Douglas Watson, a native of Tuscumbia, Alabama, was one of those proud Marines whose gallant courage earned him the Medal of Honor during the Battle of Iwo Jima.

Wilson “Doug” Watson was born in Tuscumbia on February 18, 1922, to Charles Watson and Ada Posey Watson. He was the oldest of five sons and two daughters. By 1940, the family had moved to Earle, Arkansas, where the elder Watson was a sharecropper. Doug completed several years of school while working with his father on the farm. He registered for the draft in June 1942 and then joined the Marines in August of 1942. After training in San Diego, California, Doug left for the Pacific theater in January 1943.

Doug Watson was a Private with Company G, Second Battalion, 3rd Marine Division at Bougainville and Guam. In February, Watson’s Company was part of the invasion of Iwo Jima. During an assault on February 26, he was carrying a BAR [Browning Automatic Rifle], when his platoon was pinned down by fire from a heavily fortified Japanese pillbox. Disregarding the intense fire, Watson charged the pillbox, firing his BAR until he was close enough to throw a grenade inside. He quickly ran to the rear and shot the defenders as they fled. His platoon was then able to advance to its objective.

The next day, Watson’s platoon once more found itself pinned down at the base of a small hill. The young private along with his BAR assistant rifleman, sprang into action again. He charged through intense enemy fire to the top of the hill, all the time firing his BAR from the hip. The fighting was furious with the Japanese attacking from the reverse slope but Watson stood erect, exposed and fought with fearless abandon. He held the hill for 15 minutes until his platoon was able to join him. Watson had been shot seven times and wounded in the shoulder with a mortar fragment. More than 60 Japanese lay dead on the hill around him.

When interviewed afterwards, Watson said, “I guess I was too excited or something to be scared. After I had taken off my belt to relax, I started looking over my magazines and then is when I broke out in a cold sweat. I only had two rounds of ammunition left.”

Watson would continue fighting on Iwo Jima until March 2, when he received a gunshot wound to the neck. He was evacuated from the island and did not return to action.

Wilson Douglas Watson received the Medal of Honor for his courageous actions on February 26 and 27, 1945. President Harry S. Truman presented the medal during the Nimitz Day Ceremony at the White House on October 5, 1945.

Watson was honored by his hometown of Earle, Arkansas, October 25, 1945. He was given a parade, followed by a program at the high school. Speeches were given by Arkansas Governor Ben Laney and other officials. When asked to speak, Watson attributed his fighting skills to his past hunting experiences, “I guess I grew up with a gun. Now, I want to take it easy for a while and get caught with my hunting.”

Watson was discharged from the Marine Corps in 1946. He would marry Patricia Sullivan and they would have a son and a daughter. He later joined the U.S Air Force and then served in the U.S. Army, including a stint in Korea before retiring in 1966 as a Staff Sergeant.

Wilson Douglas Watson died in Russellville, Arkansas on December 19, 1994. He was survived by his wife, a son and daughter and four brothers. He was buried in the Russell Cemetery.