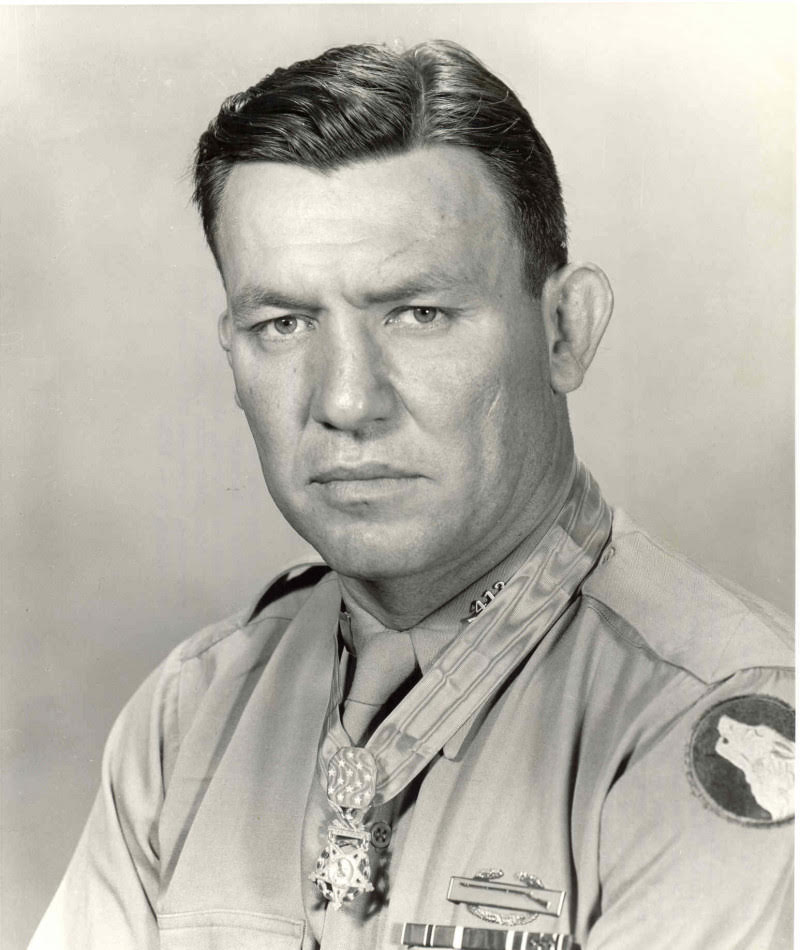 The night of November 2, 1944 would long be remembered by the young weapons platoon leader of Easy [E] Company of the 413th Infantry Regiment. First Lieutenant Cecil Bolton had just led his men across the Mark River, near North Brabant in the Netherlands. As soon as they were across the river, his platoon was pinned down by two German machine guns. He tried to eliminate them using mortar fire but they continued to inflict heavy casualties. The platoon’s advance had been halted by the machine guns and heavy artillery fire. Bolton found it difficult to locate the enemy’s well-camouflaged position in the dark. He had already been wounded in both legs, and was then knocked unconscious by a German shell. As soon as he regained consciousness, he crawled forward to his rifle platoon’s position. After giving instructions to his men, he asked for volunteers to go with him in search of the machine guns. Taking a two-man bazooka team to cover him, Bolton advanced chest-deep into the chilling waters of the canal toward one of the machine guns. When he got to within 15 yards of the gun emplacement, he charged their location, killing two of the gunners with hand grenades.

Bolton then returned to his bazooka team and proceeded to attack the second machine gun emplacement across open ground. They shot one enemy sniper before being discovered and coming under direct fire from the machine gun. The trio quickly dispatched the three-man machine gun crew. Ignoring his own wounds, Bolton then proceeded to search out the 88-mm artillery piece that had been shelling his men. Plunging into the icy canal water again, he got close enough to the gun to make out its silhouette. He directed fire from his two partners who were able to destroy the gun with rocket fire. As Bolton made his way back to his platoon, he was again wounded. He refused aid, ordering his platoon back to their own lines for safety. He crawled after them and collapsed after rejoining his men.

His heroic assaults in the face of vicious enemy fire, his inspired leadership and continued aggressiveness while suffering from serious wounds and with complete disregard for his own safety, earned First Lieutenant Cecil H. Bolton the Congressional Medal of Honor. It was presented by President Harry S. Truman on September 1, 1945.

Cecil Hamilton Bolton was born October 7, 1908, in Crawfordsville, Florida. His parents were Sanders M. and Octavia Hamilton Bolton.  The family moved to Colbert County, Alabama where Cecil was educated in the Sheffield school system. Cecil’s family moved to Madison County, Alabama in the early 1930s. Cecil registered for the draft in 1940 and was drafted in July 1942. In a 1945 press release by the War Department [announcing his Medal of Honor], it states that, “ Cecil operated a night club and managed a stable of boxers before being drafted.” He had married Babette De Fronch in 1934. After her death, he married Bessie Mabel McNabb in 1939.

After basic training, Cecil Bolton’s Army test scores got him admitted to Officer Candidate School [OCS] at Ft. Benning, Georgia, where he earned a commission as a Second Lieutenant. He was assigned as Weapons Platoon Leader, Company E, 413th Infantry Regiment, 104th Infantry Division [the Timberwolves]. By 1944, Bolton had been promoted to First Lieutenant and found his regiment under the command of the First Canadian Army of the Netherlands. In late 1944, that army had been given the job of clearing the Scheldt Estuary in the Netherlands. First Lieutenant Cecil Bolton’s actions on November 2, 1944, materially helped his Battalion reach their objectives and the overall objectives of the Canadian Army.

After WW II, Bolton continued to serve in the Army including service in the Korean War, where he earned the rank of Colonel. In addition to the Medal of Honor, Colonel Bolton was awarded the Silver Star, the Bronze Star [2], Army Commendation Medal and the Purple Heart [with multiple Oak Leaf Clusters].

Colonel Cecil H. Bolton died in 1965 at Brook Army Hospital in San Antonio, Texas. He was 56 years old. He is buried at Ft. Sam Houston National Cemetery in San Antonio. He was survived by his wife, Bessie Mabel McNabb Bolton and a brother, Lloyd Thomas Bolton.