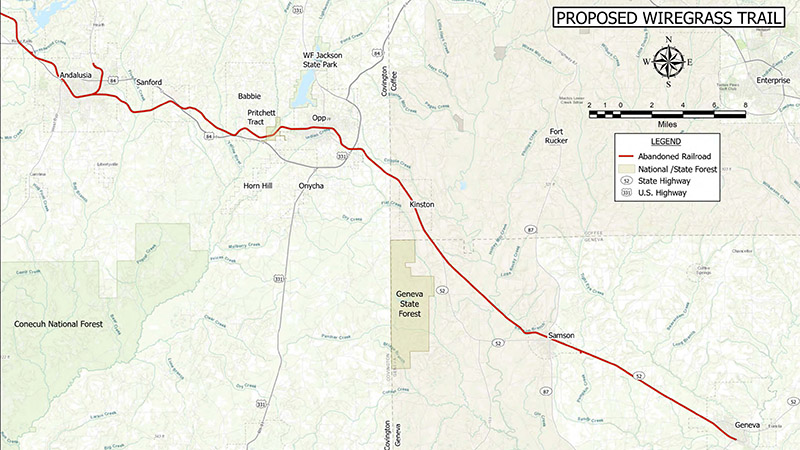 The proposed path of a possible Rails to Trails route through Covington, Coffee and Geneva counties.

The Covington County Commission continues to discuss joining a regional partnership aimed at exploring a possible Rails to Trails program.

During a commission meeting Tuesday, Dist. 92 State Representative Mike Jones spoke about the Wiregrass Trails Partnership, which will be made up of representatives from across the three-county area with the purpose of researching the Rail to Trail program.

“The first step in this process is to get organized so that we can all come to the table so that we can learn more and share that information with our constituents. The preliminary meetings will be to gauge interest,” Jones said.

“We should visit these other trails to gain knowledge from their experience; look at what they did right and learn from their mistakes. It’s too early to say ‘yes’ or ‘no’ to the trail right now … we need more information,” Jones said.

At least three commissioners said they have been contacted by property owners who have voiced concerns about the trail.

“I’ve spoken to people who are for it and against it. Those who are for it do not own property (along the rail line) and those against it do. I know if I had property there I would have concerns too,” said Dist. 3 Commissioner Tony Holmes.

“What we are talking about raises big questions for those who own property in these rural areas,” Dist. 1 Commissioners Kenneth Northey said.

There was also a concern regarding the verbiage in the partnership resolution where they said the wording ‘support of the partnership’ could be misconstrued as support for moving the trail program forward.

Dist. 2 Commissioner Michael Smith added that he would need more information before agreeing to join the partnership, possibly bringing in an expert who assisted other communities who established a Rails to Trails program.

“We are literally in the very first steps,” Jones said. “At this point, we don’t have the data, but that’s what we need to do … get the data so we can bring it back to our constituents. We have to start somewhere and this gets us all in the same spot to learn the facts.”

Jones said in his research on Rails to Trails, communities are seeing financial success.

“One of the reasons to support the trail is that there is a three- to four-year return on investment. That’s phenomenal and would have an economic impact for those towns it goes through. About 100,000 people per year are visiting these trails and they tend to spend money in the communities they visit.”

Commission Chairman Greg White said the Wiregrass Trails Partnership is being established to find out whether a Rails to Trails program is the right fit for Covington County.

“The group we are being asked to join is designed to take the lead in getting information and holding public hearings,” White said.

Ultimately, Dist. 4 Commissioner Tommy McGaha made a motion to join the partnership, but that motion died due to lack of a second. The commission agreed to work toward meeting with the trails program expert and rephrasing certain language in the resolution, possibly bringing it back for discussion at a future commission meeting.

The 43-mile stretch of rail line in consideration is owned by CSX. The proposed trail would travel through Andalusia, Opp and Kinston before ending in Geneva. The City of Andalusia voted last week to implement a Capital Improvement Cooperative District in support of the rails to trails program and could receive a $400,000 grant through the Federal Highway Administration’s Recreational Trails Program.

Other items discussed by the commission included: